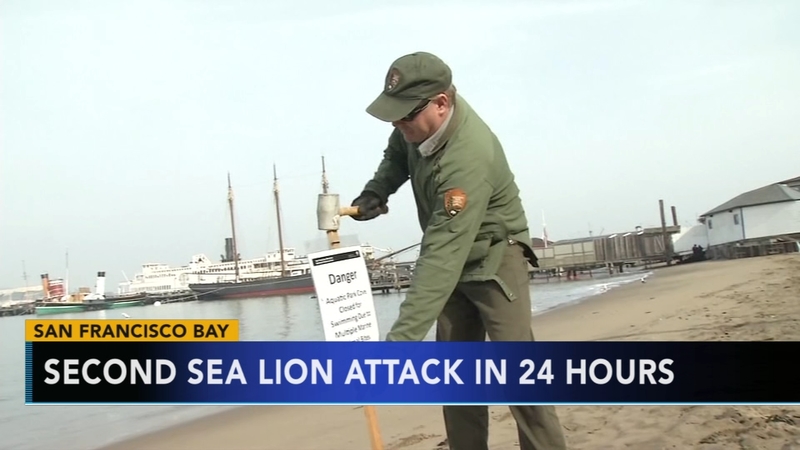 A sea lion bit a man on Friday as he swam in the waters off San Francisco Maritime National Historic Park. Another swimmer was seriously injured Thursday after a sea lion bit him on the arm.

6abc sister station ABC7 News spoke with the swimmer who was bitten by the sea lion on Thursday after he was reported in good condition following the attack. He had a good sense of humor about the dangerous situation.

The victim of Thursday's rare sea lion attack spoke from his hospital room while waiting for surgery at Zuckerberg San Francisco General Hospital. Christian Einfeldt says he's in almost no pain and the injury could have been much worse. He believes the male sea lion trailed him as he swam from the beach to the mouth of Aquatic Park.

When he turned around to head back, the sea lion was right there. "I did feel threatened, I did have warning, but I was a quarter mile from shore, there was nothing I could do," Einfeldt said. The sea lion bit him on the upper right arm.

The wound started bleeding steadily and Einfeldt knew he couldn't swim back. "I was relatively calm because I wasn't dead." Fortunately, a sailboat came into view.
"The boat saved his life if the boat hadn't been there, who knows what would have happened," Officer Matthew Reiter said.

The boat's captain picked up the injured swimmer, radioed for help and then made a beeline for shore. Officer Reiter applied a tourniquet and applied pressure to the bite on the man's upper right arm. The injured swimmer was taken to Zuckerberg San Francisco General Hospital. Hospital officials say Einfeldt is in good condition.

Dr. Claire Simeone is the Conservation Medicine Veterinarian for the Marine Mammal Center in Sausalito. She conducted a study on seal and sea lion attacks that was published in 2015. Dr. Simeone says because the attacks are so rare, it's hard to pinpoint the aggression. "Sometimes animals can be sick or injured, they may be showing a behavior or protecting an area, and sometimes the behavior seems more random," said Dr. Simeone.
Dave Maloney thinks he saw the aggressive sea lion this evening, "I don't know you get a sixth sense, I've been doing it for 30 years." He and many other devout swimmers were not deterred by the attack.

Einfeldt doesn't blame the sea lion and he's eager to get back in the water. "I asked the doctor, when can I go back swimming?" Einfeldt said. He does plan to make one change to his swimming routine. "I'm now going to be swimming in waist-deep water," he said. "This is their kingdom, I don't want to roll the dice a second time."