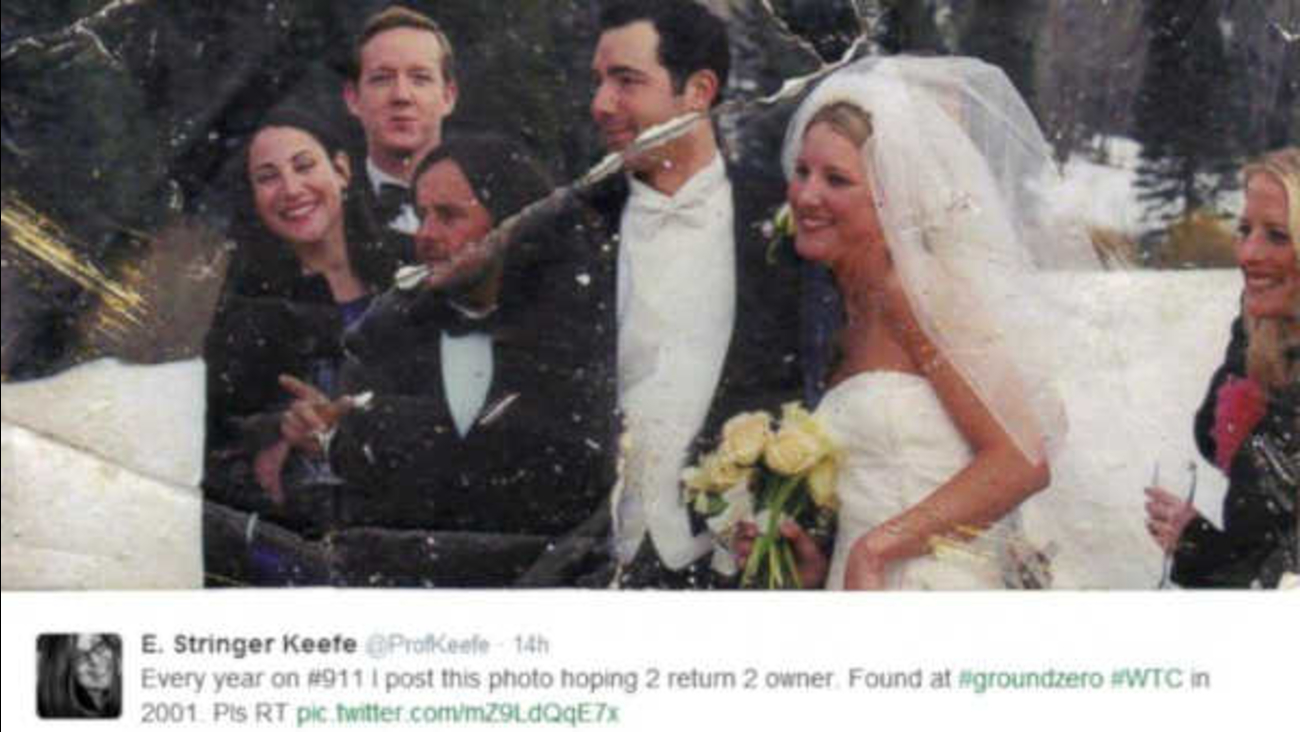 NEW YORK -- The woman who worked 13 years to return a wedding photo found in the rubble of the World Trade Center after the 9/11 attacks is representative of "the best of humanity," said the man who will finally get back the photograph he'd had tacked to his cubicle wall.

Fred Mahe thought he'd never see the photograph again, after his office on the 77th floor of the second World Trade Center tower was obliterated in the Sept. 11 attacks.

But the photograph of him with his college friends at their wedding somehow survived the attacks and for the past 13 years a college professor named Elizabeth Stringer Keefe, who was given the photo by a friend who found it in the ash near Ground Zero, has tried to find its owners.

On every anniversary of the 9/11 attacks, Stringer Keefe posted the photo on social media sites or worked with friends to try and find the owner.

Mahe, a guest at the wedding who is seen facing the camera in the photo, contacted Stringer Keefe on Friday after a coworker sent him a story about the photo.

Mahe identified the couple as Christine and Christian Loredo, college friends of his who were married in Aspen, Colo.

In 2001 Mahe, now living in Colorado with his wife and two children, was still on his way to work when the attack started. The wedding photo -- taken just a few months earlier -- was tacked to his cubical wall.

Mahe told ABC News he felt there was special significance that he found out about the photograph the day after the anniversary of the attacks.

On Friday, after Mahe sent Stringer Keefe a message on Linkedin, the pair talked for the first time over the phone. Stringer Keefe told ABC News the pair had an emotional moment talking about the photograph and that she hopes they'll meet up soon.

Mahe said it is incredible that Stringer Keefe managed to be so persistent for so long in looking for the owners of the photograph. and that speaking to her over the phone felt like he was speaking to a good friend.

"The story is Elizabeth, the story is persistence and trying to help someone she didn't even know," said Mahe.

He said Stringer Keefe told him she kept the picture safe in her favorite Ernest Hemingway book.

Mahe also contacted Christine Loredo, the bride in the photograph, who said she felt the photo was a "great memento of resilience."

Loredo, now living near San Francisco with her husband, told ABC News the photos also brought back memories of being worried for Mahe after hearing about the attacks.

"It definitely brought tears to my eyes," she said.

Loredo was able to talk to Stringer Keefe and said she was struck by how dedicated the woman was to finding the owner of the photograph.

"I think it's nice to know that people out there care so much for strangers," Loredo said. "It gives me confidence in humanity."

Before Stringer Keefe connected with Mahe, the photo started gaining major traction on social media this year, getting retweeted more than 35,000 times and "favorited" more than 12,000 times.

Stringer Keefe came to inherit the photo from a friend she was visiting in New York City in October 2001, a month after the attacks.

"I visited New York City, the World Trade Center site and my friend Jennie, who lived in New York City at the time of attacks," she said. "She found the photo at Ground Zero in the days after the attacks, but was leaving New York City for a permanent move to California."

Her friend was about to move across the country, and she wanted to ensure that the photo was kept in good hands and with someone who would be "persistent" enough to try to track down the photo's original home, Stringer Keefe said.

"She gave it to me with the request that I do something meaningful with it," Stringer Keefe recalled. "There's so much beauty and happiness in the photo, and whatever relationship it had to 9/11, I wanted to care for it until I could return it to its owner."
Related topics:
societyfinancial districtnew york cityseptember 11september 11thseptember11
Copyright © 2022 ABC News Internet Ventures.
SEPTEMBER 11TH
FBI releases newly declassified record on 9/11 attacks
Bucks Co. residents remember those lost in Sept. 11 attacks
Chaplains who served during 9/11 hold remembrance ceremony
Tribute in Light shined bright over NYC, marking 20 years since 9/11
TOP STORIES
Son of Philly police officer shot, killed during apparent robbery
Officials ID teen killed in Montco crash; 4 others seriously injured
Introducing Millville, New Jersey's first female mayor
Tax season officially begins. Here's everything you should know
Amtrak, SEPTA dealing with COVID-related staffing issues
Second arrest made after man killed by stray bullet on Thanksgiving
Broad Street Run sets date for 2022 race
Show More
Philly sees more graffiti during COVID, but artists say it's an outlet
Getting paid on Venmo or Cash App? New tax rule might apply to you
COVID-19 cases dropping in NJ, but numbers still high
Chester Co. man charged with raping child multiple times inside home
Philadelphia veterinarians team up to provide emergency care for pets
More TOP STORIES News