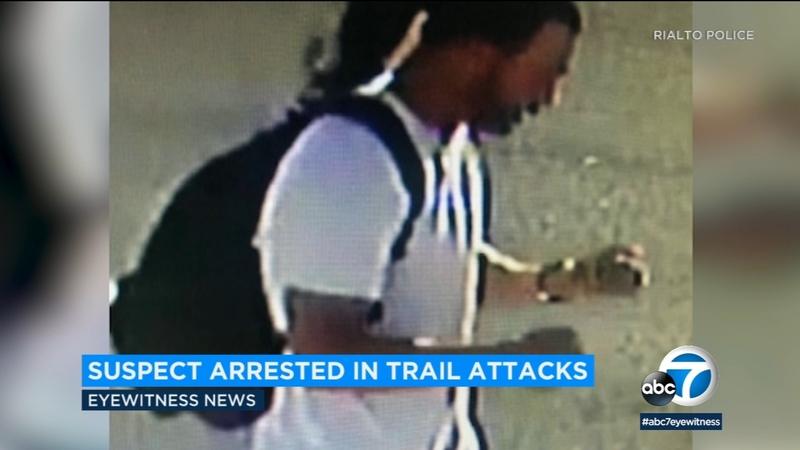 RIALTO, Calif. -- A registered sex offender was arrested for allegedly sexually assaulting four women along a popular trail in California.

He was wearing a GPS ankle monitor due to a prior conviction.

"The suspect held the female at knifepoint and attempted to steal her cellphone then attempted to sexually assault her," said Lt. Cameron Nelson with the Rialto Police Department.

Police identified Dandeneau as the suspect behind the attacks that took place between May 2 and May 6.

"We launched an extensive investigation that had undercover officers on the trail day and nighttime hours to make sure those citizens were safe, but also give us the best opportunity at catching him," Nelson said.

The community was unaware that as they strolled along the trail, an undercover officer was likely among them while detectives worked to identify and find the suspect before he got wind of the investigation.

"They were able to find surveillance video. They went out to multiple residents, hundreds of residents, apartment complexes to see if anyone saw this suspect, and we actually did get a tip from the community that led us to the arrest," Nelson said.

For walkers like Jada Grinage, she was relieved to hear that police arrested Dandeneau last Friday.

"I think our police force out here, they are really good at taking action quick," said Grinage.

Her mom would like to see the extra patrols continue.

"We do feel unsafe on certain parts of the trail," said Barbara Grinage.

Police are crediting a tip from a resident who viewed a sketch and surveillance video to help them find and arrest Dandeneau. At his home, they found a knife believe to have been used in the attacks.

"Once we made the arrest, we realized he was on a GPS monitor tracking system. That tracking system shows him at the crime scenes during the times of the attack and his path away from those scenes," said Nelson.

Police said that during Dandenaue's last check-in with his parole officer back in April, he was in compliance, but they also believe he may be linked to another similar crime that happened on April 8 on the trail. It wasn't until the recent attacks that police were able to piece together the similarities and determine the suspect was likely the same person.

"Once we launched that operation, we didn't have another attack," said Nelson.