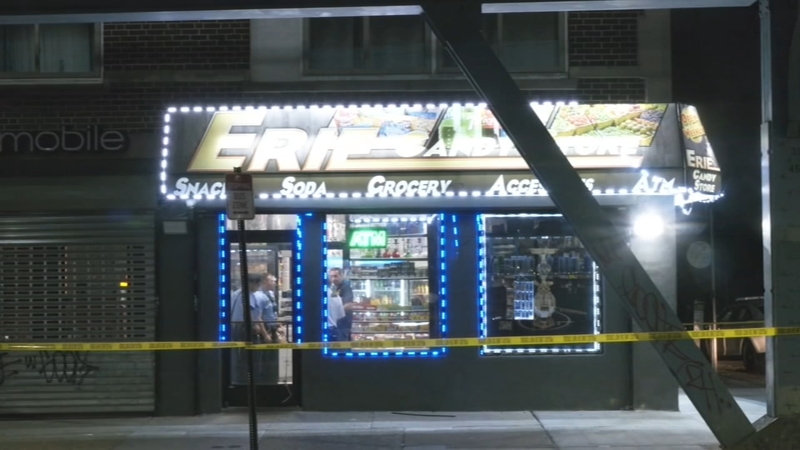 PHILADELPHIA (WPVI) -- Philadelphia police are investigating a shooting that occurred at a candy store Friday night in Juniata Park.

The incident happened shortly after 10:00 p.m. on the 3900 block of Kensington Avenue.

Police say a man in his 20s was assaulted by two men and one woman who walked into the store.

"Based on the video footage, what we were able to see is that one of the males ambushed the victim with a sucker punch to the head, knocked him down," said Inspector D.F. Pace of the Philadelphia Police Department. "At that point, the female began kicking him, and the other male also began assaulting him as well."

The woman then shot the man in the head before all three suspects fled the scene, officials say.

The victim, whose identity remains unknown, was transported to Temple University Hospital listed in critical condition.

RELATED: 'A lot of us were on edge': 2 suspected carjackers captured in East Falls: Police

Police say they are searching a nearby playground for a possible weapon.

Residents in Juniata Park say violent crimes have escalated in the past year.

"Crime is definitely building in this neighborhood," said Kate Clarke, president of the Juniata Park Civic Association. "It is building here just as it is across the city. Gun violence is escalating. It is ridiculous."

Clarke says homeowners are deciding not to stick around as the number of incidents increase.

"More and more people are moving out. More for sale signs are going up," said Clarke. "I feel anxious because of everything that transpires. Hopeful that people in the neighborhood band together and put a stop to it."

ALSO RELATED: Newlywed in a coma after brutal beating in Queen Village: Police