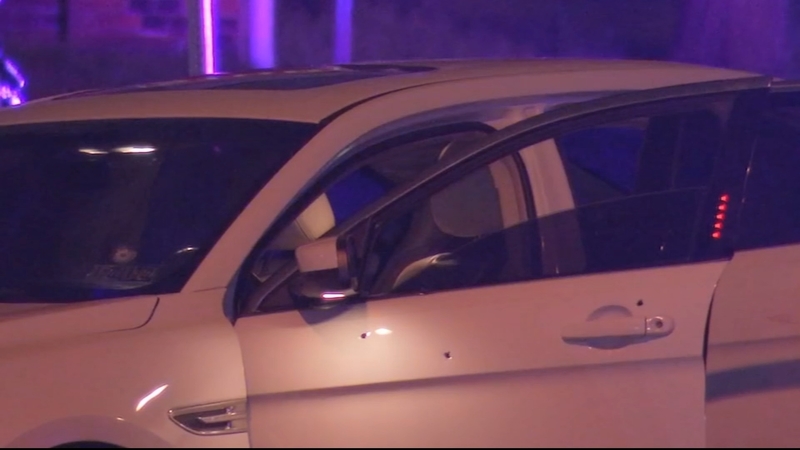 PHILADELPHIA (WPVI) -- A father was killed and his son and another man were seriously injured after multiple gunmen opened fire in Southwest Philadelphia on Wednesday night.

The 28-year-old father has been identified as Joshua Butts of Philadelphia.

It happened just before 7:18 p.m. near 53rd Street and Baltimore Avenue near Harrington Elementary School.

Police said a 6-year-old boy was riding in a car with his father and another man, 29, when the shooting occurred.

The car was struck by bullets at least 12 times, police said.

The 6-year-old was shot in the stomach and lower back. His father and the other man were shot in the chest.

The 29-year-old man was able to get out of the vehicle and flag down police.

"They were flagged down by a (29-year-old) African American male who said that he had been shot," said Philadelphia Police Commissioner Danielle Outlaw.

Police believe Butts was driving the vehicle when he was shot in the chest.

Investigators said he tried to drive away but ultimately crashed into several parked cars near the shooting scene at Baltimore Avenue and 55th Street.

Butts was taken to the hospital where he was pronounced dead shortly after 9 p.m.

The 6-year-old boy and the other man were taken to the hospital in critical condition. The boy was conscious at the time, police said.

The boy has undergone surgery; he is now listed as critical but stable and is expected to survive, police said.

Action News spoke with Butts' mother who said that the 6-year-old boy is doing better.

Police are still investigating what sparked the gunfire. No arrests have been made.

More than 50 children have been shot in the city of Philadelphia this year. Residents reflecting on the grim milestone were at a loss for words.

"It's definitely getting worse. It definitely needs to stop. It's unnecessary, especially when children are involved," said Dionnah Lloyd.

Some, like Roselyn Langford are relying on faith that things will get better.

Outlaw said there needs to be harsher penalties for those breaking gun laws.

"Until there are serious consequences for those who choose to make poor choices around the use of illegal gun carrying and the illegal use of firearms, there's nothing to deter folks from doing what they're doing with these guns," said Outlaw.

She also said major societal changes have to happen to curb the violence.

"In the long term, until you get more jobs, housing, education and until those things are fixed, we, being the police, are going to continue to be out here chasing our tails ultimately," said Outlaw.

No weapon was recovered.

As of April 11, there have been 142 homicides in Philadelphia. That's a 33% rise over this time last year.