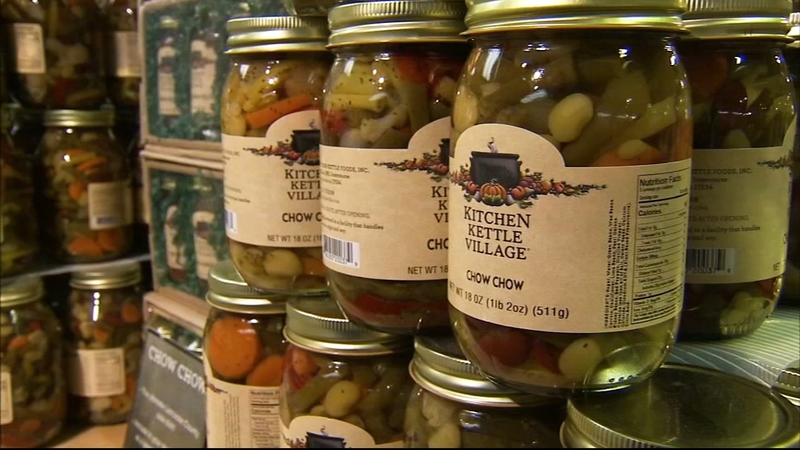 LANCASTER COUNTY, Pennsylvania -- The Kitchen Kettle Village in Lancaster County, Pennsylvania has been family-run for three generations and now boasts a mix of 40+ shops, restaurants, and lodging.

However, it all began with the anchor store, the Jam & Relish Kitchen.

"My grandparents started the business back in 1954," said Michelle Rondinelli, president of Kitchen Kettle Foods. That's when Bob and Pat Burnley decided to purchase a jelly business.

"When they bought the jelly business, they got burners and kettles, which is the name kitchen kettle," said Joanne Ladley, second-generation co-owner of Kitchen Kettle Village. "They put that in the garage."

"Shoofly pies are very big for us," said Michael Burnley, CEO of Kitchen Kettle Foods. "It has a layer of molasses on the bottom."

Michael and his sister, Joanne, grew up on the premises and in the business. They credit their late father with the original idea.

"But my mom was the worker and had the local connections," said Ladley.

Pat offered kitchen tours to show how products were made and hired Amish women to help cook the jams and jellies.

"In the early '60s, tourism was starting to grow in Lancaster County," said Burnley. "People began to stop in and visit."

"The business grew from the sense of welcome that they got when they came here," said Ladley.

"Our number one selling jam by far is our pepper jam," said Rondinelli. "We make over 100 different varieties of products between salsas, jams, pickles, relishes."

There are traditional Pennsylvania Dutch foods like pickled beets and chow chow, which Pat was known for.

"Ours is 14 different vegetables," said Ladley. The vegetables are jarred in a sweet and sour sauce made of sugar and vinegar.

The family says each generation put their stamp on the business, adding new stores to help the village grow.

Ladley says they have changed with the times, evolving to keep the village updated for the next generation. "It's so heartwarming when people bring their grandchildren," she said.

"They're coming back because their parents brought them when they were kids," said Rondinelli. "We're creating these memories and experiences for people."