Simone Biles and 'the twisties': How fear affects the mental health and physical safety of gymnasts

Analysis: A look at the twisties: Suddenly a gymnast is no longer able to do a twisting skill she's done thousands of times before
CNNWire
By Analysis by Elle Reeve, CNN 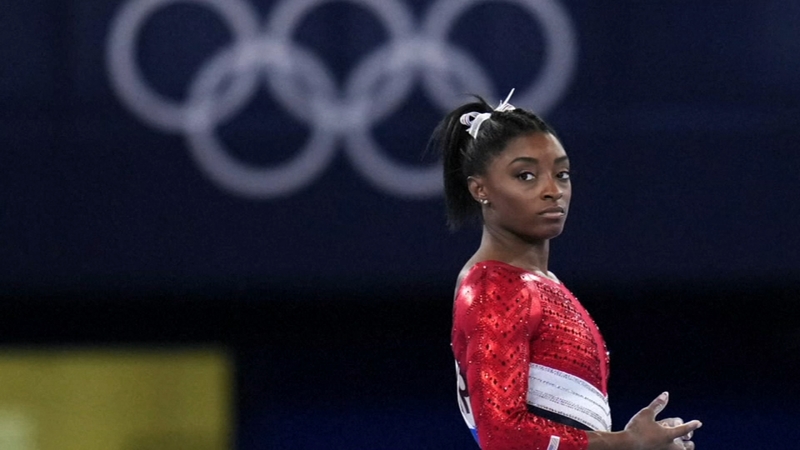 Simone Biles and 'the twisties': How fear affects safety in gymnasts

You can learn a lot about a subculture by the slang it develops. Gymnastics has a lot of slang around fear: the twisties, headcasing, mental block, bailing, balking.

Gymnastics is obviously physically demanding with a high injury rate. But it is extremely difficult psychologically as well. Many of the skills could kill you. When Kevin Durant's foot was off by an inch in Game 7 of the NBA's Eastern Conference semifinals, his shot was worth two points instead of three, and the Brooklyn Nets lost in overtime. When Riley McCusker's foot was off by an inch on her beam dismount at the 2017 American Cup, she slammed backward onto her neck and then rolled over it.

For every perfect, floaty flip performed in competition, there are thousands done in practice, many of them ending with scrapes, crashes, and haunting near-misses.

When Simone Biles scratched most of the Olympic team final, she said it was not because of a physical injury, but her mental health. This doesn't mean she felt sad, or didn't have her heart in it to compete. It means that her psychological state put her at significant physical risk. If her brain wouldn't play along with what her body knows how to do, she could be seriously injured.

Vault was the first event for the US and Russia in the team finals. Biles was supposed to compete an Amanar, a backward flipping vault with 2.5 twists. The Amanar has taken out a lot of knees, but Biles has been competing the vault spectacularly since she was a 16-year-old with braces in 2013. But in warmups, she bailed out of it, doing just one 1.5 twists out of a vault that got pretty high in the air. In the competition, it was worse: 1.5 twists again, but with less height, forcing a deep step out of it.

A Yurchenko with 1.5 twists is worth much less than an Amanar, so Biles scored just a 13.766. The US was a point behind Russia after vault, which is usually where the Americans secure a large lead. This made the possibility of winning gold very low, no matter how well Biles's teammates rallied.

Biles pulled out of the rest of the team competition. "I just don't trust myself as much as I used to," Biles told reporters in Tokyo. "I'm a little bit more nervous when I do gymnastics. I feel like I'm also not having as much fun."

Biles later also withdrew from the individual all-around competition, again saying she wanted to focus on her mental health.

USA Gymnastics said it supported her decision "wholeheartedly," adding in its statement that Biles would be assessed every day.

A case of the 'twisties'

She said in morning practice that she had a little bit of the twisties. The twisties are a mysterious phenomenon -- suddenly a gymnast is no longer able to do a twisting skill she's done thousands of times before. Your body just won't cooperate, your brain loses track of where you are in the air. You find out where the ground is when you slam into it.

I was a competitive gymnast for 10 years, though a mediocre one. I quit when I acquired 7 inches in height and an attitude problem, on top of an extant paralyzing fear and total lack of flexibility. Since then, I've followed gymnastics obsessively, and covered it occasionally. And in March, I came down with the twisties myself when I dragged a CNN crew to an open gym class in Dallas and threw sad, little back full twists into a foam pit.

Swiss gymnast Giulia Steingruber got the twisties in 2014. "When I wanted to twist, especially on vault ... I had no feeling where I am. I was really scared," Steingruber said in a 2016 documentary. "It was quite tough for me, because I didn't understand why it came, and I couldn't stop it. It was just strange for me, and it was horrible. The feeling was really horrible."

She had to relearn it, starting with a simple half twist on floor. "I started to learn the twist again like a small child." In 2016, she won an Olympic bronze medal on vault.

Flipping and twisting at the same time can be extremely disorienting -- you can't just watch where you are with your eyes. You have to feel it. This is proprioception, a sense of where your body is in space and what it's doing.

In gymnastics, this is called "air sense." And Biles is famous for how good hers is. "She's always had incredible air sense, which is what you need in this sport," her former coach Aimee Boorman told Houstonia magazine in 2015. "She doesn't crash very frequently. Other kids, you'll just see them splat, or get lost in the air. That doesn't happen with her."

Her natural talent is why her missed vault is so stunning. But her decision to scratch makes a lot of sense. When the twisties set in, it's hard to know when they'll go away. But Biles's decision to protect herself marks a shift from the old way gymnastics worked in the US.

"We also have to focus on ourselves, because at the end of the day we're human, too," she said. "So, we have to protect our mind and our body, rather than just go out there and do what the world wants us to do."

At the 2016 American Cup, I asked then-national team coordinator Marta Karolyi how she dealt with athletes who felt fear. She blew me off, saying at the elite level, fear is not a problem anymore.

This, obviously, was not true. Asked by the New Yorker in 2016 why she wouldn't try a front handspring double-front vault, called the Produnova, Biles said, "I'm not trying to die." But many elite gymnasts have described the pressure to never show weakness under Karolyi.

Some more slang: bailing is when you pop out of a skill in the middle of it before you've done the whole thing -- like doing a single flip instead of a double. Balking is when you hesitate or stop doing the skill before it's really begun -- especially dangerous on backward flips, because often the momentum is not stopped but slowed, and can make you crash onto your neck or head. (Baseball has this term too, but it tends to come with less risk to the spine.) A mental block is when one skill becomes a fixation, and you can't make yourself do it, even if it's relatively easy. A headcase -- which is almost a slur in gymnastics -- is a talented gymnast who melts down in competition.

At the 2011 national championships, Gabby Douglas balked twice on her beam dismount -- two back handsprings into a double pike. After the first balk, which drew gasps from the crowd, you can see a coach point to the beam to tell her to get back on it.

At the 1996 Olympics in Atlanta, Kerri Strug landed a vault on one leg as the US won its first-ever team gold medal in gymnastics. This is remembered by regular people as a glorious moment of sports heroism, but on the gymternet, the take is more nuanced. The US didn't actually need Strug's score to win the gold.

In Athlete A, a documentary about how former team doctor Larry Nassar was able to get away with his sexual abuse crimes for so long within elite gymnastics, 1986 national champion Jennifer Sey makes the argument that gymnasts were trained under Karolyi's system to be perfectly obedient. Of Strug's vault, Sey said, "Everybody's cheering her on as this hero, and all I could think was, 'Why are we celebrating this? Don't pretend she had a choice ... She was not going to do anything but go do that vault."

Gymnastics has changed then, and even since 2016. This has been in part thanks to Biles, who has been so surpassingly great that USA Gymnastics has had to respond to her complaints. It has also been because of the internet, where the gymternet has put huge pressure on the gymnastics establishment to change.

The most influential gymnastics coverage comes not from NBC broadcasts, but from the podcast Gymcastic, which since 2012 has been relentless in pushing radical ideas like that psychological abuse of athletes is bad, that taking care of your mental health is important, and that elite gymnasts are not fat just because they have breasts.

"It's the Olympic Games," Biles told the press, "But at the end of the day, it's like, we want to walk out of here, not be dragged out here on a stretcher."