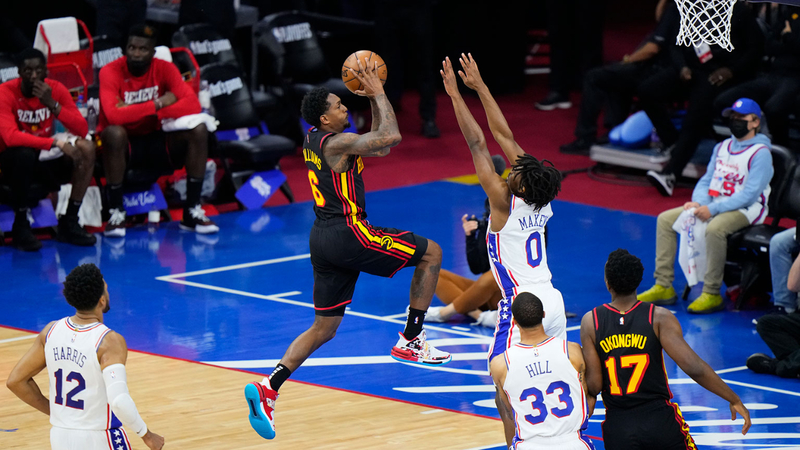 PHILADELPHIA -- After the 76ers bowed out of the playoffs on Sunday following a postseason in which he was historically inept from the free throw line and struggled to score in the second round, Ben Simmons shouldered the blame.

"I ain't shoot well from the line this series," Simmons said following the Sixers' 103-96 Game 7 loss to the Atlanta Hawks. "Offensively, I wasn't there. I didn't do enough for my teammates. ... There's a lot of things that I need to work on."

The three-time All-Star was putting it mildly.

He shot 15-for-45 (33%) on foul shots against Atlanta and 34.2% from the line for the 2021 playoffs overall, accounting for the worst free throw percentage in NBA playoff history for a player with at least 70 attempts, according to research by ESPN Stats & Information.

The Hawks held him under 10 points in four out of the seven games in the conference semifinals, including his five-point showing Sunday.

He was particularly unreliable at the end of games, failing to attempt a single shot in the fourth quarter in five out of the seven games, with many believing the disappearing act came in direct correlation to his lack of confidence at the free throw line.

RELATED: 76ers eliminated from NBA playoffs after falling to Hawks in Game 7

After a series that will be remembered by Philadelphia fans as a blown opportunity -- the Sixers squandered a 2-1 series lead by failing to protect an 18-point cushion in Game 4 and a 26-point advantage in Game 5 and then lost game Game 7 at the Wells Fargo Center, where the team had held the best home record in the league over the past two seasons -- Joel Embiid said that he believed Simmons opting against taking what seemed to be an open opportunity under the basket in the fourth quarter Sunday ended up being the turning point in the loss.

The sequence he was referring to came with 3:29 remaining when Simmons posted up Danilo Gallinari, eluded him with a spin move to get to the basket and rather than going up for a score himself, passed the ball to Matisse Thybulle, who was fouled on a layup attempt, with the Sixers down 88-86.

"I just assumed Gallo was coming up on my back," Simmons explained. "And then [John] Collins moved out [of the lane], so I thought we just had a wide-open dunk."

Simmons, who will turn 25 next month and is owed $140.4 million over the next four seasons, admitted there is a mental hurdle he has to overcome.

"The first thing I'm going to do is clear my mind and get my mental right," he said. "You got to be mentally tough. You can't take games for granted. Especially in the playoffs. Every game matters. Every possession matters."

Sixers Upset with their GM 7 loss

Joel Embiid
"it sucks to come up short again... it felt like this was going to be our year... it just sucks... I gave everything I had"#Sixers pic.twitter.com/CmLp5wuisn

Sixers coach Doc Rivers was asked a question postgame that cuts to the core of where Philadelphia stands as a franchise after a fourth straight season failing to make it past the second round with Simmons as a foundational piece: Can the 76ers expect to win a championship with him as their point guard?

While outwardly sullen about the result of the series, Simmons did defend himself when a reporter suggested that his All-Star impact of the regular season tends to shrink in the postseason spotlight.

"How many assists did I have?" he asked, referring to his 13 dimes.

"What did Trae [Young] shoot?" he asked, bringing attention to the Hawks star's 5-for-23 shooting night, with many of those misses coming with Simmons on him.

Rivers stood up for Simmons, too, crediting Young's struggles to Simmons' presence.

"That's what Ben did. And so, there was a positive to Ben," Rivers said. "Even though people are upset at him. But defensively, he did his job tonight on Trae."

But Embiid, after saying "it just felt like this was going to be our year," would not commit to wanting to run it back next year with the same core in place.