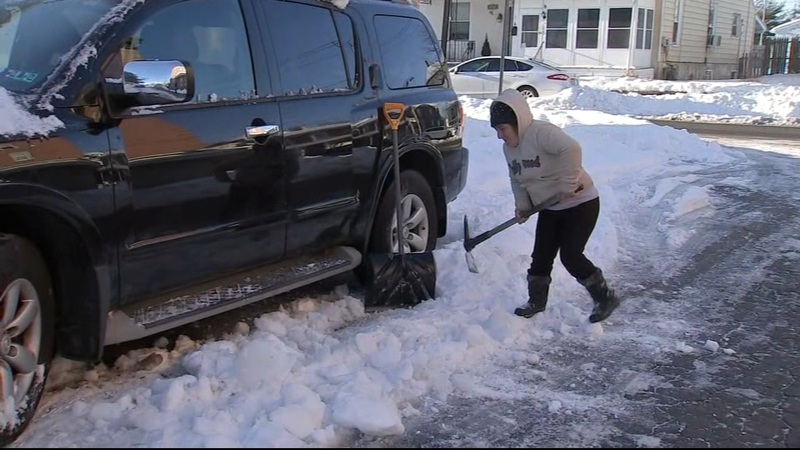 Some residents still digging out from Sunday's storm

LANSDALE, Pennsylvania (WPVI) -- Sunday's snowstorm brought about 9 inches of snow to Lansdale, Pennsylvania, but by Monday morning, the sunshine had finally broken through.

With blue skies in the background, Sung Kim scraped the ice off of his car's windshield. The IT specialist, who usually works from home, had to go in to work the day after the storm, which came one week after a nor'easter hit the area.

"This one was a lot worse," Kim said of his efforts to dig out after the storm.

Many residents already had piles of snow and ice leftover from last week's nor'easter. Sunday's storm made it harder to break through.

"We started shoveling and our neighbors took pity on us. So we got a snowblower lent to us yesterday," said Julianna Lange of Lansdale.

It was so hard to break through the ice that Rosa Maria of Lansdale resorted to using a pickaxe to dig out her Nissan SUV from the spot that it had been parked on the street.

"It's not going," she said of the car, before hacking away at the ice again.

Sunday's storm brought icy conditions to areas across the region including Chester County, where the Deputy Director of Emergency Management warned residents to stay off the roads to give snowplows more space to work.

Officials also warned of the possibility of power outages in the icy conditions.

Snowplows were on major roads and highways, including 309 in Montgomery County. The Hatboro-Horsham area was one area that got the brunt of the storm, with huge flakes falling throughout the entire morning and most of the afternoon. But, by late Monday morning, that area was flooded with sunshine.

But the DeSanto family of Lansdale hopes the sun doesn't work too quickly to melt the work of art they created during the storm. They built a fort in their front yard with snow "bricks" constructed from a mop bucket that just so happened to be the perfect size.
"I did most of the job," laughed father of two Domenico DeSanto.

"And I filled in the cracks in the inside to make it smooth," said his son.

Five-year-old Gloriana DeSanto couldn't help but notice that the fort looked a lot like the home of her favorite Disney Princess, Elsa.