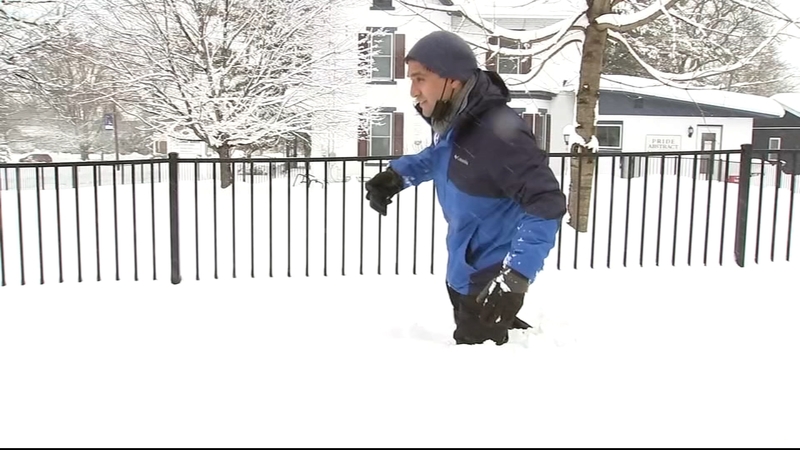 COOPERSBURG, Pennsylvania (WPVI) -- It seems about the only thing that rivals excitement over picturesque snow scenes like the ones witnessed in Springtown, Bucks County, is how quickly those stalled by it worked to undo it.

"Yeah. Definitely. Definitely, over it," said resident Bill Hill. "It feels great, we need a lot of sunshine right now," he added of the brief reprieve in snow.

Hill's wish was also granted, with some strings attached as rays of light pierced through yet another snowfall.

The heavy flakes were sure to add to the more than the 30 inches the nor'easter slammed the community with.

Just as buried in snow, is neighboring Coopersburg in Lehigh County.

It's where this 5'6" tall reporter nearly vanished in the more than two feet of snow that blanketed the sidewalk.

We met Walt Commiso as he battled that same snow to pave a path for his wife to safely pass.

After a few passes, he managed the task successfully.

While a shovel or snow blower worked for many, Canadian Sarina Ashford came ready to do battle with her John Deere gator equipped with plow.

"It's a little overkill for here, but it's nice that I can help out the neighbors," said Sarina Ashford.

Overkill on a small storm, but for this one, she said, "it's appropriate, yeah."

Her neighbors were certainly grateful as she churned snow from driveways and curbs.