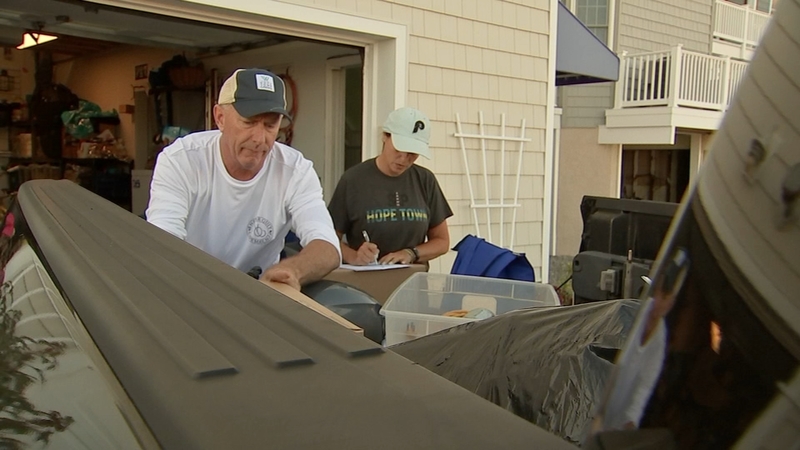 OCEAN CITY, New Jersey (WPVI) -- An Ocean City, New Jersey couple is leading a humanitarian effort to help their neighbors and their son stranded in the Hurricane-ravaged Bahamas.

"So far, we got two generators, we got chainsaw, all sorts of hand tools," said Chris Terrels.

Chris and his wife, Carol Lyn Terrels, were loading up all sorts of gear they may need down in Elbow Cay in the Abaco Islands of the Bahamas where they just finished building a brand new home back in June. A home that was damaged by the mammoth Category 5 Hurricane Dorian.

"Our house is one of probably three or four in the south end of the island that's even habitable," said Chris.

Their 31-year-old son Josh, a native of South Jersey, has lived on the island for the last seven years. He refused to leave and rode out the storm in the couple's home with two others he rescued after their homes were destroyed.

Although communications with the islands are limited, Josh was able to send back videos and pictures of the storm and the devastation left behind.

"Unimaginable devastation, he had us on a video chat, showed us a lot of what was going on down there in terms of the destruction," he said.

The Terrels plan to lead a caravan of friends from Ocean City to take as many supplies as they can, load them up on their 35-foot boat docked in Palm Beach, Florida. A boat appropriately named, "Never Quit."

"Everyone on the island is like a family and we cannot be there," said Carol Lyn. "If we can stick it out, we will. I have a little medical training and he's a builder so between the two of us, we got some skills we know was can use down there."

"I hope we're just doing what anyone in our situation would do. People need help, you gotta help," Chris added.

Chris just retired as a homebuilder and ironically wondered what he and his wife's purpose would be going forward. He says, here it is-- they think they found it.