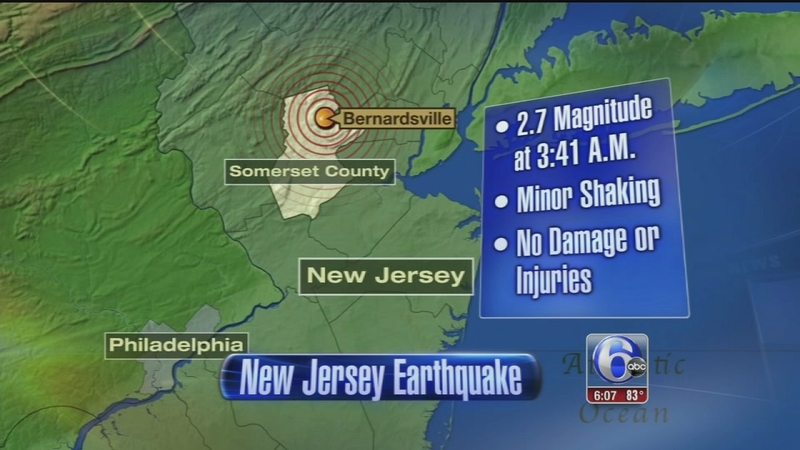 BERNARDSVILLE, N.J. (WPVI) -- Folks in northern New Jersey are still a bit nervous after a small earthquake rattled them on Friday.

And though it may have been slight, the repercussions will be felt for a while.

We've all heard of things that go bump in the night. But in the Bernardsville area it was a boom - a 2.7 magnitude earthquake that jolted people out of a sound sleep.

Resident Lindsay Kielley tells us, "It sounded like something had hit the house. It was like a big tree had fallen and it shook things off our shelves etc. So it was a pretty big jolt."

Allison Munafo of Peapack says, "I was sleeping and it woke me up out of my sleep and it felt like a train was coming down the street I guess. And then my baby woke up and then we had to feed her and my dog was shaking."

Seismologists say the quake happened about two miles underground. That's shallow for an earthquake, but it was enough to shake things up above ground.

This is what this morning's 2.5 magnitude earthquake in NJ looked like. Residents say it sounded like an explosion. pic.twitter.com/mlpU5vAAnI

Sari and Dave Mazen own the Bagel Bin in downtown Bernardsville.

Sari says, "I thought the house was exploding or there was an explosion and it was just a loud, loud noise."

And Dave explains, "She goes 'It's thunder.' I said, 'that's not thunder,' and I started to walk around the house and I didn't know what it was. It was like a big thud. I didn't know if something fell on the house or the water Heater blew up. It just scared us."

Bernardsville police confirm there have been no reports of injuries or damage, but the early morning wakeup call from beneath the ground has everyone talking.

Mike Arminio from Bernard's Caf says, "It's very unusual. I don't think we've had an earthquake here in my existence alone."

Mini earthquakes occasionally happen in New Jersey. The last one was a 1.7 seventeen miles outside of Trenton in December.