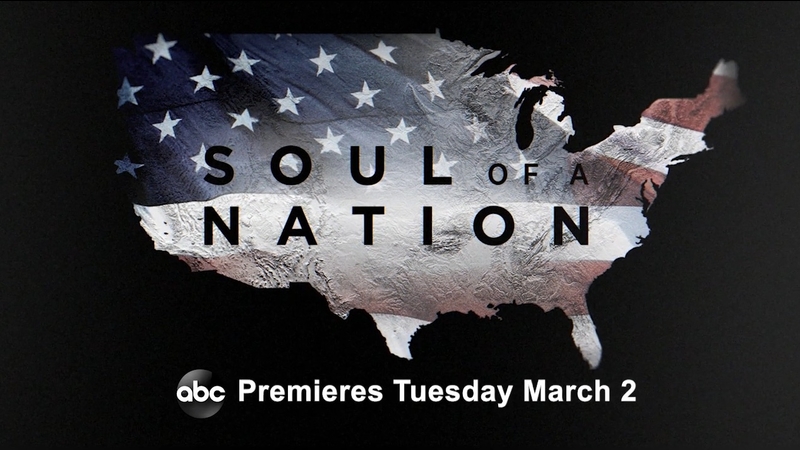 LOS ANGELES -- This month, ABC is airing "Soul of a Nation," a six-part newsmagazine series focused on the Black experience in America.

"Soul of a Nation" is the first broadcast network newsmagazine focused on Black life in America, according to ABC.

The network said the historic series will "present viewers with a unique window into authentic realities of Black life and dive deeper into this critical moment of racial reckoning" with episodes focused on spirituality, Black joy, activism in sports and the racial reckoning that erupted after the death of George Floyd last year.

The series will also feature figures in entertainment, sports and media like Carmelo Anthony, Nick Cannon, Deon Cole, Kim Coles, Tommy Davidson, Mo'Ne Davis, Danny Glover and others. Each episode will close with a musical or spoken-word performance, including one by Cynthia Erivo.
EMBED More News Videos

Others featured include 95-year-old Lucille Burden Osborne, the great-granddaughter of Charles McGruder, her enslaved ancestor who was deployed to neighboring plantations as a breeder but created a home for his many children after emancipation. One episode will offer a behind-the-scenes look at influential young Black creators on the social network TikTok.

"ABC News is proud to partner with ABC Entertainment to host 'Soul of a Nation,' a primetime convening place for diverse audiences to call home," series creator Marie Nelson, the senior vice president of integrated content strategy at ABC News, said in a statement. "It's 2021 and the demands of this time call upon the media community to grant Black viewers more opportunities to see their lives reflected in all of its complexity and to present all of our audience access points to gain understanding."

"Soul of a Nation" premieres Tuesday, March 2 on ABC

A show by Black people,
for all people,
about the Black experience in America.

Watch the premiere of @ABC's #SoulofaNation with John Legend, Common and hosted by Sterling K. Brown.

Added co-executive producer Eric Johnson: "We're excited to expand enterprising Black storytelling and the celebration of Black culture beyond the month of February. Viewers of all backgrounds, regardless of race, will be moved, educated and inspired by the broad range of stories and topics shared on this show."