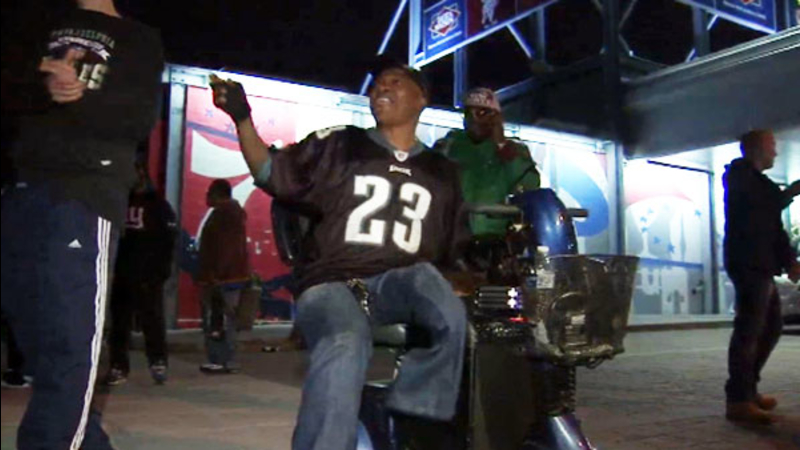 SOUTH PHILADELPHIA (WPVI) -- A stolen prosthetic leg, belonging to a well-known Philadelphia military veteran, has been found by SEPTA police on a subway train.

The victim is Sonny Forriest Jr., who is known for singing outside Eagles and Phillies games.

He says it was around 8:30 Sunday night in the parking lot of Lincoln Financial Field when a drunk woman in her 20's wearing Eagles gear ran up to him, jumped in his lap and broke his microphone.

She allegedly apologized and offered to pay for the microphone.

"She said, 'I will pay you for it.' I said, 'That's alright baby go ahead and have a good time,' and then she disappeared," said Forriest.

But, he says, the next thing he knew, she was cutting through cars with his prosthetic leg in hand.

Forriest says he takes the prosthetic leg off sometimes when it's bothering him. It was on the side of his wheelchair when the woman grabbed it and ran.

Then around midnight, SEPTA police found the prosthetic leg on a subway train.

Action News was at South Detectives in South Philadelphia when Forriest came to retrieve his prosthetic leg.

Forriest says he was told there is surveillance video of the woman that has not been released. However, he says he doesn't feel the suspect needs to be locked up, but someone should talk to her about her actions.