"We'll just do it. Give us a hard hat; we'll just do it ourselves. At this point, I'm tired. I'm just tired," said one resident.
WPVI
By Corey Davis 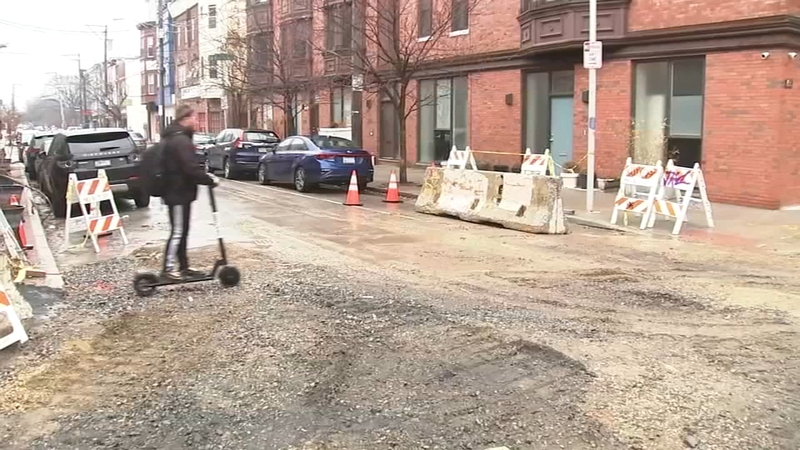 PHILADELPHIA (WPVI) -- Months-long repairs following a water main break that flooded South Philadelphia homes and businesses will continue until at least late April to early May, according to utility company officials.

The Philadelphia Water Department held a public Zoom meeting Wednesday to provide updates on the progress of repair work at 6th and Bainbridge streets in the Queen Village neighborhood.

The water main broke in July 2021 and sent water rushing down the street and into residences and buildings.

Many people living in the area have complained of noise and traffic delays.

"We'll just do it. Give us a hard hat; we'll just do it ourselves. At this point, I'm tired. I'm just tired," said resident Brandon Diaz.

"It's been a lot. Just constantly jackhammering (while on) my Zoom calls. It's pretty frustrating," said another resident.

Water department officials said they finished rebuilding the underground infrastructure back in November, and now they're waiting on PECO to complete its part of the repair job.

"It's been a little bit too long. We live out here on Federal Street. It just seems like nothing is ever getting done around here," one resident said. "You know, what do we give our taxes for at the end of the day?"

PECO officials said they've been laying 400 feet of utility lines and ductwork in nearly every direction along the intersection.

The electric company is scheduled to be done mid-April and then the water department will return to repave the street.

"When this process got underway and we first met with all of you in October, we estimated this process would take nearly six months to complete, which put us at the end of April. We feel pretty confident that we will get there very close to, if not maybe a week or two beyond that," John DiGiulio of the Philadelphia Water Department told residents on the Zoom call.