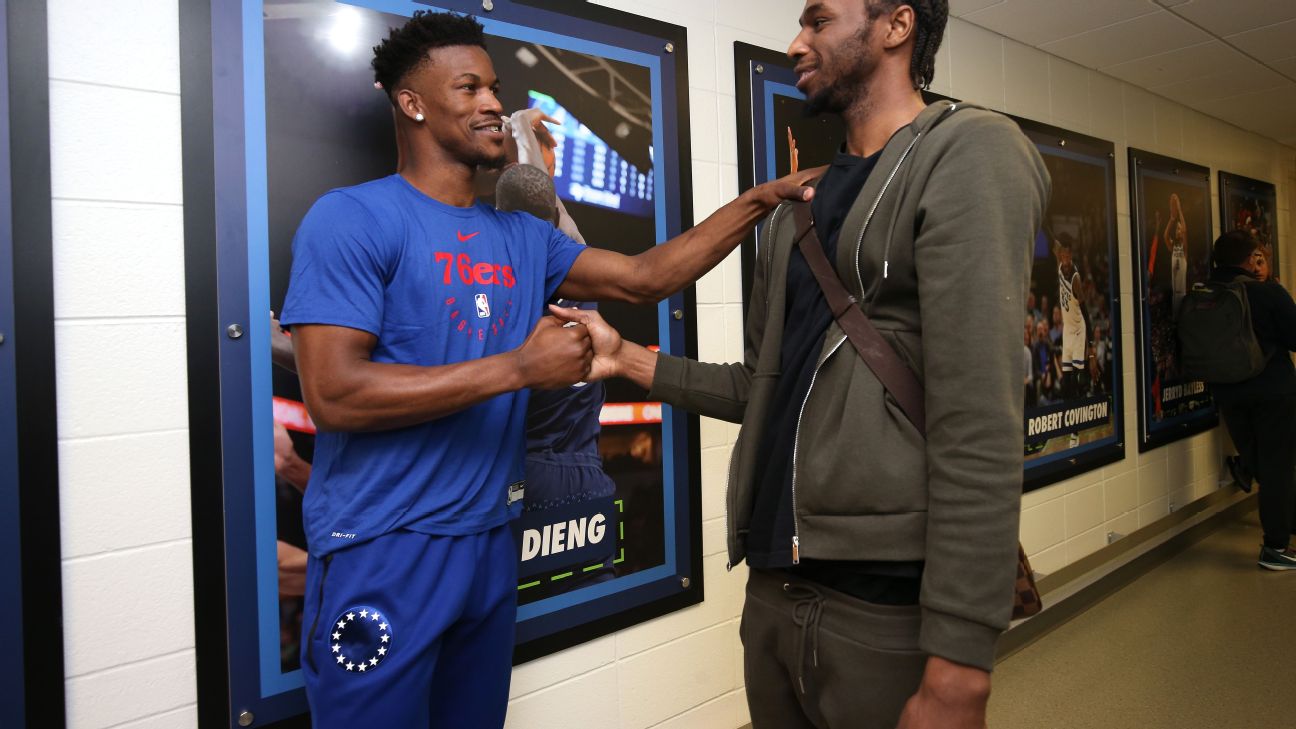 In his first game back at the Target Center since being traded to thePhiladelphia 76ers, Butler was introduced first in the starting lineup. Fans young and old cupped their hands over their mouths and loudly jeered the four-time All Star.

"I don't care about being loved all the time," Butler said. "It's no fun that way."

Butler skipped past a line of his 76ers teammates, high-fiving them and laughing as he went and the booing continued. Philadelphia centerAmir Johnson mockingly joined in, giving him the double thumbs-down.

"He thrives under blankets of controversy," Sixers coach Brett Brown said before the game. "I greatly respect it, and I think when you look at the high-level competitors, it is part of their DNA. It is certainly part of his DNA."

Butler and Philadelphia got the last laugh Saturday, beating the Wolves 118-109. Butler had 12 points, 15 rebounds, five assists and two steals.

"It wasn't too bad," Butler said of the boos after the game. Johnson gave Butler one final teasing boo as he talked to reporters.

Butler was traded to the Sixers from theTimberwolvesin November, but he made it known he didn't want to be part of the Minnesota organization months prior. Weeks of sitting out of practices, a fiery scrimmage during which he challenged teammates and front-office personnel, and very public discontentment followed Butler's trade request. The locker room was an uncomfortable place to be.

Eventually, the Timberwolves relented and sent Butler and Justin Patton to the 76ers in exchange for Jerryd Bayless, Robert Covington, Dario Saric and a second-round draft pick. The Wolves subsequently fired Tom Thibodeau, the coach and president of basketball operations who had championed Butler and was instrumental in bringing him to Minnesota.

But when asked on Saturday morning what specifically led to him wanting out of Minnesota, Butler replied, "None of your business."

He went on to say that he "got no ill will" toward Wolves centerKarl-Anthony Towns, whom Butler had criticized during his Minnesota tenure.

In the two teams' only other meeting since the trade, the Sixers soundly defeated the Wolves 149-107 in January at Philadelphia.

When Wolves players filed into the arena ahead of Saturday's game, Butler was sitting outside the Minnesota locker room. Butler enveloped Towns in a seemingly uncomfortable embrace. He also hugged Tyus Jones, Anthony Tolliver and Derrick Rose.

"Tyus, that's my dog," Butler said. "That's family forever and ever. All in all, the whole organization has got some good people in it."

Butler fist-bumped security guards he knew by name and greeted his former coaches.

"I wish them well health-wise, career-wise," Butler said. "But I mean, I truly be locked in on the 76ers."

By the time players were introduced, the Target Center arena was only sparsely filled.

Early on with the game tied at six, Butler went up for a missed alley-oop. When he came down, he landed awkwardly and came away from the play clutching the right side of his lower back.

Instead of retreating on defense, Butler doubled over in pain and put his hands on his knees. Brown called a timeout, and Butler hobbled to the bench but returned immediately. He got treatment on his back in the locker room after the game and told reporters, "We will see in the morning. I'm hurting."

Every time Butler touched the ball in the game, the crowd booed. The raucous might not have impeded on Butler's ability to focus, but it got on the nerves of at least one of his teammates. At halftime, Tobias Harris said he told his teammate to play off the ball.