Aaron Rodgers' hamstring injury tended to in 'privacy' of tent 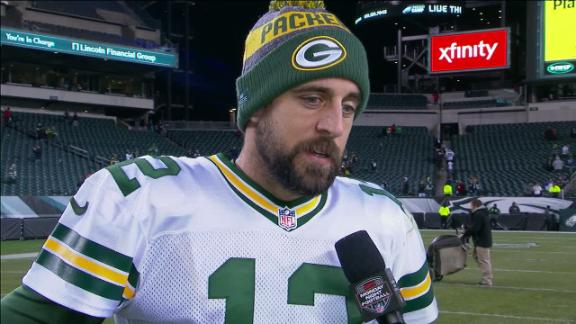 PHILADELPHIA -- It wasn't that Aaron Rodgers didn't want anyone to see what was wrong with his left leg.

No, the reason the Green Bay Packers quarterback ducked into the tent behind the bench was so no one would see him "drop his drawers," as he put it, while he received medical attention.

Rodgers said he pulled his hamstring on the opening drive of the third quarter and had the trainers tape his leg between series. When he emerged from the hut behind the visitors bench at Lincoln Financial Field, the Monday Night Football cameras were waiting for him.

"I just didn't want to be getting taped up on the television," Rodgers said. "But obviously, when I walked out and saw the camera right in my face, I knew there was probably some sort of mini-story growing. But no, I had to drop my drawers a little bit to get taped up and just wanted to do [that] in the privacy of that tent."

Rodgers not only finished the game but also put together one of his best performances of the season when the Packers needed it most. They snapped a four-game losing streak with a 27-13 win over the Philadelphia Eagles.

Rodgers' mobility was limited after his injury, but he said he did not think it would prevent him from being ready for Sunday's game against the Houston Texans. He suggested the injury might have been in part due to waiting all day to play a night game for the second straight week.

"I was a little tight in the first half for some reason," Rodgers said. "I don't know if it was sitting around the last two weeks, these night games, when you do a lot of resting. I'll be good to go, though."

Coach Mike McCarthy was less committal about how the injury would impact Rodgers the rest of the season.

"I can't tell," McCarthy said after the game. "We won't know until tomorrow."

Rodgers completed 30 of 39 passes for 313 yards, two touchdowns and no interceptions, and the Packers were especially proficient on third down, converting 10 of 14 times. At 71 percent, that was the highest rate by any team in a game this season and the Packers' highest in a game since Week 8 of 2013.

But all most people wanted to talk about after the game was Rodgers' injury and his trip to the tent. CenterCorey Linsleysaid he wasn't even aware that Rodgers was hurt. In fact, he said he thought the quarterback went under cover for another reason.

"Maybe he just had to go,"Linsley said.

Rodgers retreats to tent after injury
After landing awkwardly while scrambling, Aaron Rodgers gets examined and eventually disappears inside a tent on the Packers' sideline.

Rodgers was looking for 'privacy' in tent
Aaron Rodgers explains why he went inside a tent to get treatment for his hamstring injury.