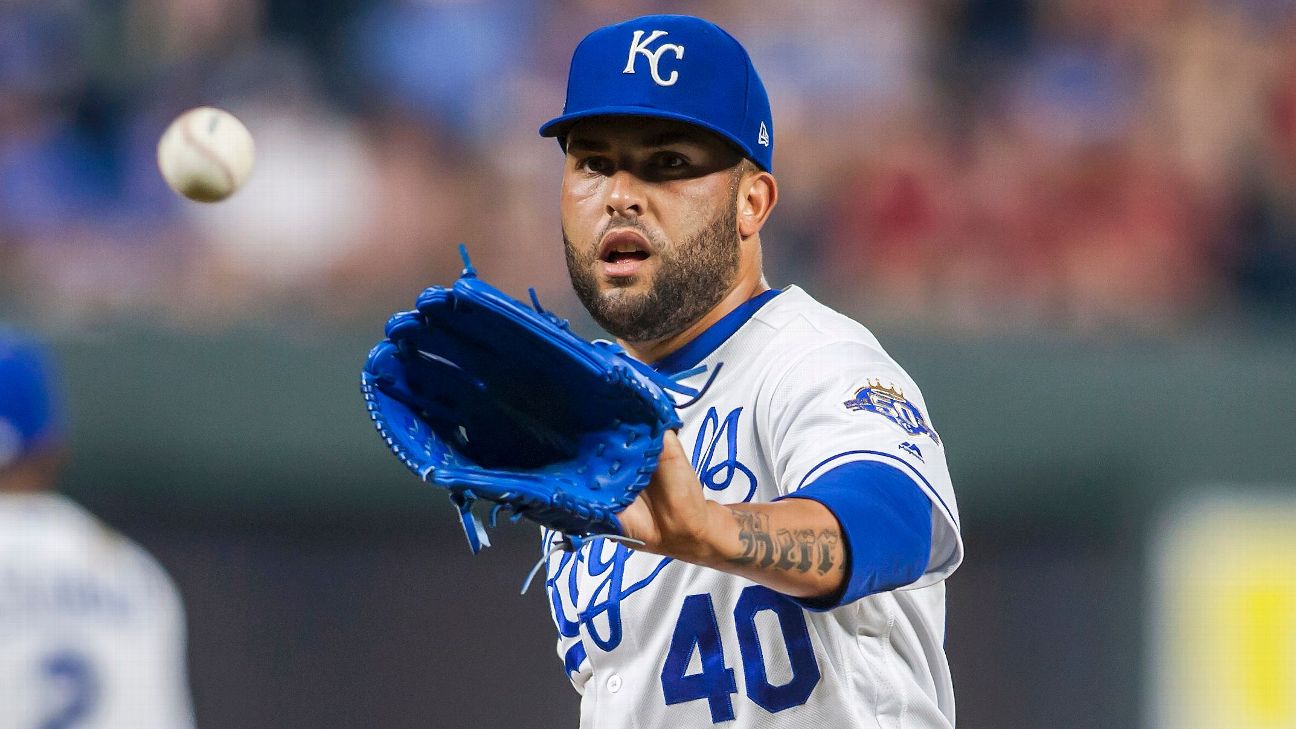 WASHINGTON -- Getting Kelvin Herrera is huge for the Washington Nationals. Getting him without giving up a whole lot is even huger.

On the surface, it might not seem like the Nats were in dire need of bullpen help. Not after last summer, when GM Mike Rizzo hit the trifecta by picking up relievers Sean Doolittle, Ryan Madson and Brandon Kintzler right before the trade deadline. But plenty can change in a year's time.

While Doolittle continues to evolve into one of the game's elite closers, Madson and Kintzler have endured bumpy first halves. Both relievers have spent time on the disabled list, and each currently sports an ERA north of 4.0. Although Madson's pectoral strain seems like the kind of injury that's easy enough for a pitcher to get past, he's at an age when boo-boos become harder and harder to bury (he turns 38 in August). Meanwhile, Kintzler -- who is eligible to come off the 10-day DL later this week -- is dealing with a forearm flexor strain, the kind of injury that has been known to lead to bigger and badder things. As such, it's easy to see why Rizzo felt the need to bolster the bullpen. And bolster it he did.

In landing Herrera from the Kansas City Royals, the Nats get a two-time All-Star who has been one of baseball's most effective closers this season. Among relief pitchers with at least 25 appearances, he ranks among the top five in ERA (1.05) and WHIP (0.82), according to ESPN Stats & Information. His declining whiff rate (7.7 K/9, down from 10.8 in 2016) and velo drop (his average fastball is down a couple ticks to 96.4) suggest that he's getting it done with a little bit of smoke and mirrors, but the bottom line is he's getting it done. And now he'll be getting it done for Washington.

Herrera gives manager Davey Martinez a bullpen that's as stacked as any around, assuming that Madson and Kintzler are able to return to form. If they can't, Herrera will end up being a pretty attractive insurance policy, especially for the price.

Despite netting one of the most coveted relievers on the trade market, the Nats didn't have to cough up any of their top prospects. Rookie sensation Juan Soto stays put. So does fellow outfielder Victor Robles, who entered this season as the No. 4 prospect in all of baseball, according to ESPN's Keith Law. Of the three players Kansas City got in return for Herrera, the only one that was ranked among Washington's top 10 prospects was outfielder Blake Perkins (No. 8).

That's a far cry from the hefty haul that relievers such as Aroldis Chapman and Andrew Miller fetched a couple of years ago. Granted, Herrera isn't the game-changer that Chapman is, and he doesn't have multiple years of club control remaining on his contract like Miller did (a free agent after this season, he's essentially a three-month rental). Still, he's a top-shelf reliever whom Washington procured at a relatively lower-shelf price.

The deal continues an annual pattern for Rizzo, who has acquired big-name bullpen help in each of the previous three seasons. Prior to nabbing Doolittle, Madson and Kintzler last year, Rizzo traded for Pirates closer Mark Melancon in 2016. The year before that, he picked up Jonathan Papelbon from the Phillies, even though Washington was seemingly set with Drew Storen at closer. That move failed epically, with Papelbon choking out Bryce Harper in the dugout and Storen imploding after being demoted to setup duty. Three years later, it appears history won't repeat itself.

"We already have an All-Star closer," Martinez said of Doolittle, who picked up his 18th save in 19 tries on Monday and boasts an absurd 43:3 strikeout-to-walk ratio. In fact, Doolittle's position is so secure that Rizzo went out of his way to find his closer in the weight room during the second inning of Washington's makeup game against the Yankees, just to let him know that his gig wasn't going anywhere.

As for how Herrera will help the Nats, Martinez said the 28-year-old righty will "be asked to do some different things." Presumably, that will include serving in some type of setup role, not unlike the one Herrera did in 2014 and 2015, when he burst onto the national scene and helped the Royals reach consecutive World Series.

Regardless of when and how Herrera performs in his new uni, however, he can't do anything to solve Washington's other issues. The Nationals, who find themselves 3.5 games behind the surprising Braves in the NL East, have been shockingly impotent on offense, averaging just 4.2 runs per game (20th in MLB). They could use some help behind the plate, where catcher Matt Wieters has been out for more than a month since suffering a hamstring injury. Even rotation depth is an issue, with starters Stephen Strasburg and Jeremy Hellickson both on the disabled list.