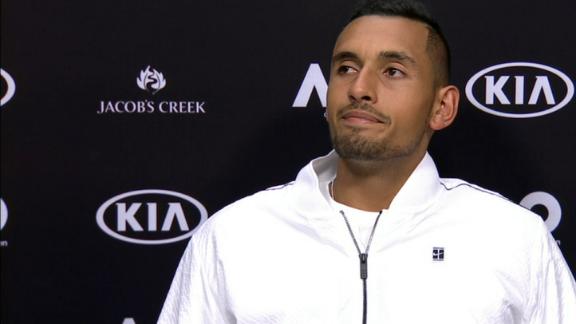 MELBOURNE, Australia -- Andre Agassi, speaking to reporters at the Australian Open via a live Las Vegas video news conference, said there are numerous parallels between his career and that of controversial Nick Kyrgios.

"I certainly went through many years when I was considered one of the great underachievers," Agassi said. "[Watching] Kyrgios at first glance, it feels very offensive to see so much talent, to see somebody in the sport that means a great deal to so many, sort of disregard it."

Agassi admitted Saturday he knows a little about being the enfant terrible of the tennis tour, as Kyrgios, 21, is considered now. That stigma was further enhanced for Kyrgios after his second-round loss to underdog Andreas Seppi here in Melbourne, in which Kyrgios squandered a two-set lead.

During the match, John McEnroe, calling the match for Eurosport, was critical of Kyrgios' questionable shot-making and, among other things, called Kyrgios' antics a "black eye for the sport."

When asked about Kyrgios' comportment, Agassi laughed at the suggestion that he managed to be "revered" around the world, whereas Kyrios is "loathed."

"The journey I lived has taught me a lot about how deep one's struggles can be and how much good can exist at the same time," Agassi said. "So I would sort of caution everybody not to represent Kyrgios as if he should be loathed.

"Separate the person from the acts."

Agassi stressed several times that he doesn't know Kyrgios well and, as such, isn't a big believer in giving "generic advice." But he did have a few takes on Kyrgios based on "a few things we know are absolute."

"We obviously know his talent and his high-end ability," Agassi said. "I think it's as much talent as you'll ever see on a tennis court. We also have heard directly from him that, in many ways, he hasn't been a fan of the game. Personally, he has struggled with his desire, with his love for the game.

"But I'm actually uplifted by his willingness to admit it. Because for me, it took me a long time to understand my particular feelings for many years, and I certainly didn't feel the need to communicate it as I was going through it."

Kyrgios is looking for a coach, but Agassi demurred when asked if he'd be interested. He said he wouldn't rule out coaching someday in general, but he doesn't have the time right now, and he would have to get to know Kyrgios or whoever approached him quite a bit better before taking the job.

"Giving him advice without understanding what his particular demons are, you know, is not going to be of use to anybody," Agassi said. "I don't want to say, 'He's so young -- this is why he feels the way he does.' But I can say because he feels the way he does, it's a very good thing that he's this young. Because he'll have some time to really work through it.

"My hope and prayer for him is that he does that."