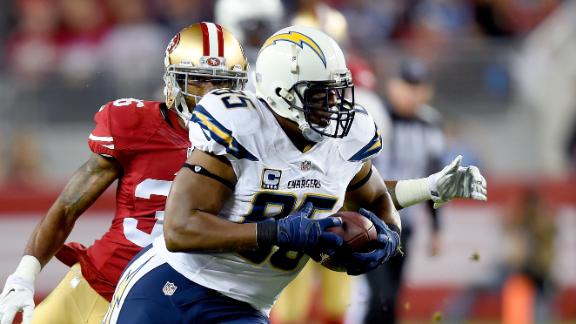 SAN DIEGO -- The NFL announced on Thursday that San Diego Chargers tight end Antonio Gates has been suspended without pay for the first four games of the 2015 regular season for violating the NFL's policy on performance-enhancing substances.

Gates is eligible to return to San Diego's active roster on Monday, Oct. 5, following the team's Oct. 4 game against the Cleveland Browns. He can participate in all offseason and preseason practices and games.

In a statement released by the team, Gates said he did not knowingly take a banned substance, but acknowledged he did take supplements this offseason and accepts the consequences.

"I take full responsibility for my actions," Gates said. "I'd like to express my sincere apologies to the Chargers, my teammates, coaches, fans and the league who have always supported me and expected and gotten nothing but the highest level of integrity from me."

Gates is not expected to appeal the suspension.

A 12-year veteran, Gates finished with 12 touchdown receptions last season, tying him with Rob Gronkowski of the New England Patriots and Julius Thomas of the Denver Broncos for the most by a tight end last season.

Gates, 35, was scheduled to make $5.9 million in total compensation in the final year of his deal. He'll miss out on nearly $350,000 due to the suspension. Gates has missed just one game due to injury over the past three seasons.

According to ESPN NFL Insider Adam Schefter, Gates had been notified weeks ago of the suspension and was surprised by the positive test.

"In my 12 years in the NFL, I have taken tremendous pride in upholding the integrity of the NFL shield and all that it entails," Gates said. "I have taken extreme care of my body with a holistic approach and never taken any substance that was illegal or banned by the NFL.

"In an effort to recover from a long season and although I was unaware at the time, I regret to confirm that I tested positive for a substance that is currently on the NFL banned substance list.

"As an NFL veteran and team leader, I should have done my due diligence to ensure that what I was taking for recovery was within the NFL guidelines. I have always believed that ignorance is no excuse when it comes to these issues, and I take full responsibility for my actions."

With Gates unavailable for the first four games of the regular season, the Chargers will lean on Ladarius Green to shoulder the load as the team's starting tight end. Like Gates, Green is entering the final year of his contract -- he is scheduled to make $660,000 in 2015.

Antonio Gates surprised, upset by suspension
Adam Schefter reports the latest on Antonio Gates, who has been suspended four games by the NFL for violating the league's policy on performance-enhancing substances.