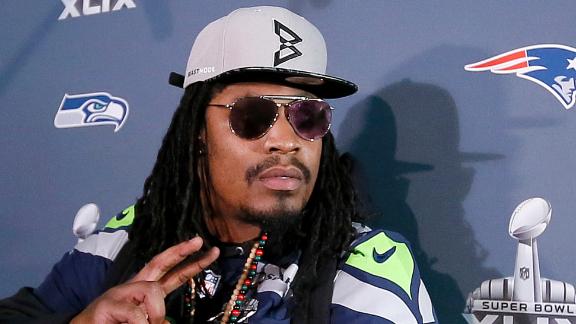 So at 3 p.m., on Thursday afternoon, he convinced his mother to make the 25-minute trek from Tempe to Scottsdale. But when they arrived at the Beast Mode Pop Up Shop located inside a cold-pressed juice store, the hats were all gone.

Three straight days of wearing the "MB" logo hat while talking to media gathered to cover the Super Bowl had taken its toll: Douglass, 14, had no chance.

His mom, Mindy, asked him if he wanted something else. "No, just the hat," he says, pouting, not even noticing the table of share size Skittles left out on the table for customers to eat.

Lynch might be a man of few words, but he certainly doesn't lack business savvy.

Seahawks fans filled with a desire for everything green and blue and "12th Man" now have something else to fill their closets with in Lynch's new clothing line. He owns four trademarks to the word "Beast Mode" and have filed three more.

In a one-and-a-half-hour period Thursday, about 60 people walked into the juice bar and made an immediate right to the back where clothing with Lynch's trademark phrase was displayed.

There was James Moquin, a firefighter from Renton, Washington, who came to the shop after his 26-year-old son Mitch texted him details he saw on Facebook. He walked away with a Beast Mode hoodie in green and blue for $58.

And there was Kevin Glidden, who was relieved to get one of the final seven hats remaining Wednesday. He was back in again, buying a Beast Mode sweatshirt for his wife.

In not answering questions by the media this week, Lynch has drawn even more attention to himself. And he's profited off his tact.

A video of him answering silly questions from his sponsor Skittles garnered more than 3.3 million views on YouTube, and a new Progressive spot making fun of his disdain for interviews just debuted.

More than 1,000 hats sold out between the brand's online store and the temporary Scottsdale shop, where he was also selling a shirt that said "About that action BOSS."

It's the line Lynch told NFL Network's Deion Sanders at last year's media day when he hid from the press. Lynch's team, of course, trademarked that phrase, too.

Even though Lynch has walked off the podium when his required time with the media has elapsed, recap after recap has given his "MB" major air time. In fact, sponsorship valuation company Front Row Analytics calculate that Lynch has received $2.6 million in equivalent advertising time from the logo on his hat over the past three days.

It's unknown whether promoting his own brand during Super Bowl media availability will result in a fine from the NFL.

Sources told ESPN on Wednesday that the league would review whether Lynch deserves to get fined for wearing his own logo, which was designed by his graphic designer friend Tommy Heinz.

Lynch's Beast Mode clothing line is in its infancy, but it has the makings of a legitimate operation.

The business is a partnership between Lynch and the agency that represents him, Relativity Sports. Chris Bevans, a former Nike apparel designer, runs the label, which currently has about 25 different products.

"If we do this right, Beast Mode could be doing $50 million in sales within the next five years," said Bevans, who insists Lynch has already received calls from big players in the apparel space who offered to run the business.

They certainly spend a lot of time protecting what they have.

Devin Lacerte, who works hand in hand with a trademark attorney, said that the brand has sent out hundreds of cease and desist letters for anyone who tries to sell Beast Mode without their permission.

As Mindy and Landon Douglass leave the store to begin their trip back to Tempe, the two start discussing Lynch and his decision not to speak when the cameras come on.

"He's making all this money, he should talk to the media," Mindy says.

Said Landon: "I thought it was classic."

Marshawn Lynch's Message To The Media
Seahawks RB Marshawn Lynch speaks to the media for the final time before the Super Bowl.

Marshawn Lynch: 'You Know Why I'm Here'
Marshawn Lynch once again addressed the media with a new catchphrase to answer all questions.

Should Lynch Be Fined For Media Day Answers?
Ryan Clark and Cris Carter react to Marshawn Lynch's answering all of his media day questions with "I'm just here so I won't get fined."

Should Lynch's Media Behavior Be Condoned?
Stephen A. Smith and Skip Bayless react to Marshawn Lynch's answering all of his media day questions with "I'm just here so I won't be fined."

The Marshawn Lynch Effect
Jim Basquil and ESPN Seahawks reporter Terry Blount discuss Marshawn Lynch's impact on the Seahawks' offense and the relationship he has with his team.