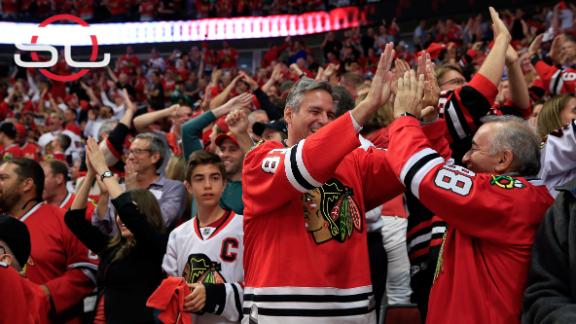 Just getting into the United Center to potentially watch the Chicago Blackhawks win their first Stanley Cup on home ice since 1938 could cost more than $1,000.

And that's not even for a seat.

Less than an hour after the Blackhawks won Game 5 over theTampa Bay Lightningin Tampa on Saturday night, the resale price on StubHub for a standing room only seat in Chicago for Monday night's Game 6 was north of $1,000.

Those numbers have held through Sunday. As of 9 a.m. ET on Sunday, the cheapest ticket that comes with a seat for Game 6 of the Stanley Cup finals was $1,979.

"Aside from when the Bears were in the Super Bowl against the Colts, these are numbers that are reminiscent of the Michael Jordan days," said Max Waisvisz, partner in Chicago-based brokerage Gold Coast Tickets.

Waisvisz said he remembered selling lower-level seats in between the baskets for the 1997 NBA Finals, the last title the Bulls clinched in Chicago.

"There are people calling who have never spent a dollar on hockey in Chicago and they just want to be there," Waisvisz said. "That's what really drives the price up."

In 1938, the Blackhawks came into the playoffs 11 games under .500 and were such underdogs against the Toronto Maple Leafs that NHL president Frank Calder sent the Stanley Cup immediately to Toronto and didn't have it in Chicago when the team won the series three games to one.

The Blackhawks are trying to become the first team to win three Stanley Cups within a six-year period since the Detroit Red Wings accomplished that feat from 1997-2002.

Fans paying big money for Game 6 tickets
Darren Rovell discusses how big the demand is for tickets to Game 6 of the Stanley Cup finals in which the Blackhawks can win the championship in Chicago for the first time since 1938.

Blackhawks have chance to clinch Stanley Cup at home
John Tortorella breaks down how Blackhawks coach Joel Quenneville will manage his team heading into Game 6 of the Stanley Cup finals.