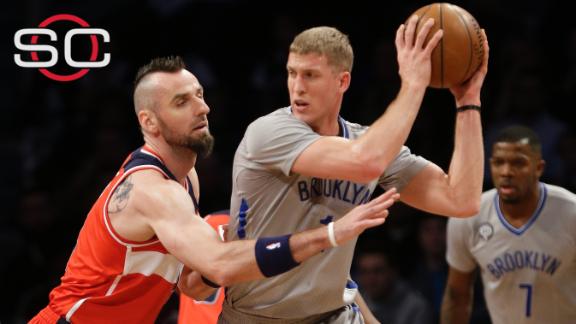 NEW YORK -- The Brooklyn Nets were active on draft night, highlighting a busy Thursday evening by trading Mason Plumlee and the rights to second-round pick Pat Connaughton to the Portland Trail Blazers in exchange for Steve Blake and the rights to first-round pick Rondae Hollis-Jefferson.

"Trading Mason was tough because I thought he gave us a lot in the two years he was here," Nets general manager Billy King said in the early hours Friday. "But looking at Hollis-Jefferson and his defensive ability, and trying to get more athletic [at the] wing position, it was something I felt we needed. And I felt he was the best defender in the draft."

The Nets selected Connaughton, a shooting guard out ofNotre Dame, with the 41st overall pick in the second round of Thursday's draft. The Trail Blazers took Hollis-Jefferson, a forward out ofArizona, with the 23rd pick in the first round.

Brooklyn had been actively trying to trade Plumlee, sources told ESPN.com. He played in all 82 games for the Nets last season, averaging 8.7 points and 6.2 rebounds per game.

He had an up-and-down 2014-15 campaign, and his minutes dwindled when center Brook Lopez got healthy and carried the team into the playoffs. A trade-deadline deal for Thaddeus Young also caused Plumlee to lose playing time, and, unlike Young, he struggled to play alongside Lopez, something King admitted.

Plumlee also did not seem like a long-term fit for coach Lionel Hollins' system.

"I think a lot of it is the things that we needed Mason to do, for some reason, he wasn't able to do them," King said.

Plumlee tweeted his thanks to Brooklyn fans Thursday night before the deal was announced.

Blake appeared in 81 games for Portland last season and averaged 4.3 points per game. King said it is a possibility that fellow backup Jarrett Jack remains on the roster and plays alongside Blake in the same backcourt.

There have been rumbles that the Nets would look to deal Jack in order to save money against potentially paying the luxury tax.

The NBA also announced the Nets had traded two future second-round picks and cash for Charlotte's 39th pick, which was used to select Juan Vaulet of Argentina. King does not expect that Vaulet will come over and play for the Nets next season.

King said Lopez most likely will opt out and become an unrestricted free agent, as expected. But the Nets intend to keep him, and King is confident they will be able to do so. Brooklyn holds Lopez's Bird rights, enabling it to pay him more money than any other team. Sources told ESPN.com one potential option is for the Nets to sign Lopez to a three-year max contract after he opts out.

The Nets also came away withSyracuse forward Chris McCulloughwith the 29th pick in the first round. McCullough is recovering from an ACL injury, and King said it was still too early to tell whether he will be able playnext season.

King was active in trying to make some moves. He dangled Plumlee and later Bojan Bogdanovic, sources said, in order to gauge interest and potentially move up into the lottery, but it didn't happen. Point guard was a position the Nets were trying to strengthen, possibly with a young player.