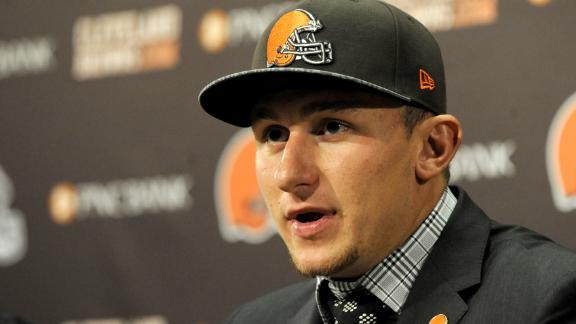 In an effort to control the frenzy following the drafting of Johnny Manziel, the Cleveland Browns will limit media coverage to this weekend's rookie minicamp and other offseason activities.

Zak Gilbert, the team's director of communications, said media coverage for Saturday's rookie minicamp would be limited to regulars from the local Cleveland media and perhaps a few national writers -- though the team is still deciding what to do about the potential crush of national media.In addition, anyone wishing to cover an offseason practice or minicamp must let the team know no later than 48 hours before the event.

The team wants to avoid a media circus, with satellite trucks and entertainment networks broadcasting from team headquarters. There will be no live video of the rookie minicamp.

"We know it will bring a lot of attention," coach Mike Pettine said of Manziel on Monday. "We'll be in the business of controlling what we can control."

The media that regularly covers the team will be given usual access.

One of three OTAs (organized team activity) must be open, though the team is allowed to limit videotaping or photography during parts of those sessions.

Decisions related to rookie minicamps are at the discretion of the team.

Gilbert acknowledged that training camp will be different. Because practices are open to the public, more than just local media will be given access.