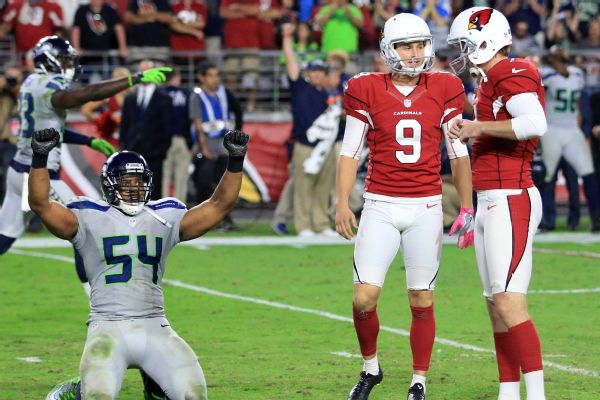 GLENDALE, Ariz. -- Long before Arizona Cardinals kicker Chandler Catanzaro and Seattle Seahawks kicker Steven Hauschka missed field goal attempts from inside 30 yards in overtime that would have given their respective teams the win Sunday night, there was another field goal attempt that impacted the outcome of the 6-6 tie at University of Phoenix Stadium.

Seattle linebacker Bobby Wagner leaped over Cardinals long-snapper Aaron Brewer to block a 39-yard attempt by Catanzaro with 13:25 left in the second quarter. Cardinals coach Bruce Arians contested that Wagner touched Brewer as he hurdled him, which would have violated Rule 9, Article 3, Item 2 of the NFL rulebook, which protects snappers from defenders who line up within the width of the snapper's shoulder pads.

A flag was thrown on the play. As later explained to Arians, it was for Wagner lining up within 1 yard of Brewer, which is illegal under the rule that protects snappers. However, the flag was later picked up.

"He touched him," Arians said. "You saw it. Did you see it? Didn't he touch him? Yeah, he sure did. It sure looked like it to me, but it was not ruled that way, same with the last [field goal attempt in overtime]. He definitely touched him.

"I'm sure I'll talk to the league and we'll get some kind of explanation that is all bulls---, like normal."

Almost immediately after the play, Dean Blandino, the NFL's vice president of officiating, tweeted that Wagner's play was legal.

Arians said he initially thought the officials ruled that Wagner didn't touch Brewer, so he threw a red challenge flag. But since the play was not reviewable, the Cardinals were charged with a timeout that would haunt them later in the first half.

After the game, Wagner said he saw on tape that Brewer bent over "really low" to snap the ball.

"I didn't touch him," Wagner said. "So I knew I was good. I didn't feel like I touched him. I knew I cleared him so I had two feet down and got the kick."

Brewer said he felt "something" on his back during the play and told the officials, who responded that the penalty for "leverage" could only be called if Wagner had stepped on somebody, which they ruled he hadn't.

Catanzaro's missed attempt kept the game at 0-0. He made a 46-yard field goal later in the second quarter to give Arizona a 3-0 lead, which Seattle eventually evened with a 40-yard field goal by Hauschka with 4:05 left in the fourth quarter.

Regulation ended in a tie, and the kickers each added another field goal to tie the game 6-6 with 6:46 left in overtime. Both Catanzaro and Hauschka were then given a chance to win the game for their teams in the final minutes, because NFL rules state that if both teams score field goals, the next team to score wins.

With 3:26 left in overtime, Catanzaro missed a 24-yard field goal off the left upright.

Arians was blunt with his comments to Catanzaro after the miss: "Make it."

"He's a professional," Arians said. "This ain't high school. You get paid to make it."

With 11 seconds left in overtime, it appeared the Seahawks were somehow going to escape with an improbable win.

Hauschka set up for a 28-yard field goal that would have given Seattle a 9-6 victory. But he missed too.

"It is just an unfortunate play, and I feel bad about it. But we are going to grow and get stronger. I will be a stronger kicker after this."

Seahawks coach Pete Carroll said afterward that the snap and the hold looked good. He didn't think the kick was rushed.

"He has been making kicks for us for years," Carroll said. "I love him, and he's our guy."