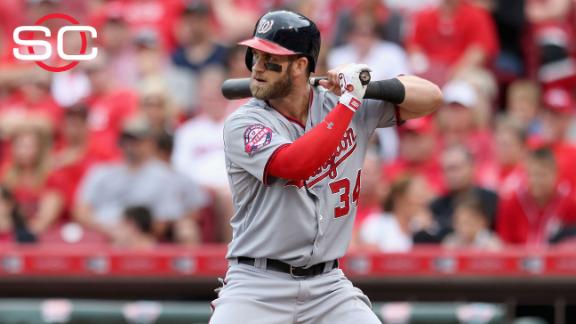 Despite being tied for major league lead in home runs, Washington Nationals outfielder Bryce Harper is considering skipping out on the home run derby.

Harper told the Cincinnati Enquirer that he may not participate in the long ball event but that he hasn't made a final decision.

One reason Harper may pass on the event is his father's recent surgery. Ron Harper pitched for Bryce Harper in the 2013 home run derby, when he finished second to Yoenis Cespedes. Ron Harper had rotator cuff surgery after a snowboarding accident, Bryce Harper told the newspaper.

"I probably won't be able to do it this year, because he's my guy," Harper told the Enquirer of his father.

The fourth-year veteran has 18 home runs this season, tied with Nelson Cruz for the most in Major League Baseball. Harper is second in the majors with 43 RBIs.

All-Star events will be held at Great American Ball Park in Cincinnati from July 12-14. Harper said his father was a Reds fan growing up.

"My dad taught me about the Big Red Machine and all those guys. And then there's Barry Larkin -- I could go on and on," Bryce Harper said. "I know a lot about the Reds' history because of my dad. It's fun to talk to him about it."

Harper unsure of derby participation
Christina Kahrl discusses why Bryce Harper may pass on participating in the 2015 Home Run Derby and what impact that would have on the event.