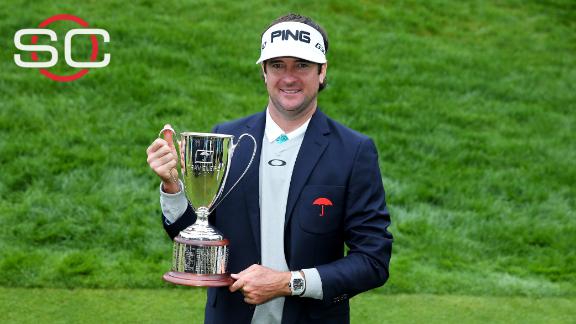 CROMWELL, Conn. -- Bubba Watson is hard to beat in a playoff.

The long-driving lefty made an 8-foot birdie putt on the second playoff hole Sunday to outlast Paul Casey and win the Travelers Championship for the second time.

Watson improved to 5-1 when going to extra holes.

Casey overcame a three-stroke deficit with five to play, tying Watson at 16-under 264 in light rain at TPC River Highlands.

But the 37-year-old Englishman, playing the tournament for the first time, lost his chance at the title while playing the par-4 18th for the third time when his third shot from a greenside bunker flew over the green and landed on the cart path.

Watson hit his 160-yard approach just to the right of the hole to set up his winning putt.

"I hung on, and that's what you have to do sometimes to win," Watson said.

Watson also needed extra holes to win the WGC-HSBC Champions in China in November at the start of the season and won the Travelers in 2010 in a three-way playoff for his first win on the PGA Tour.

"It's just about staying calm," he said. "That's what you have to do. You just breathe and walk slower, take some deep breaths and focus on the fact that no matter what you still come in second place."

Watson had a chance to win in regulation, but the two-time Masters champion bogeyed the 17th while Casey closed with three birdies on the final five holes, sandwiched around a bogey on No. 15.

Casey watched in the scoring trailer with 9-month-old son Lex on his lap as Watson made a 3-foot par putt to force the playoff.

"There are always ifs and buts and could haves," Casey said. "But the goal was to give myself a chance to win, and I did that."

This was the sixth time since 2004 the tournament has been decided in a playoff.

Brian Harman, who had a one-stroke lead after 54 holes, had a 69 to finish a stroke out of the playoff. After 39 straight holes without a bogey, he had back-to-back bogeys on Nos. 9 and 10 to fall two strokes behind Watson. His birdies on the final two holes were not enough to catch Casey and Watson.

But the finish assured the 28-year-old from Georgia a spot in the Open Championship, along with Canadian Graham DeLaet, who finished two shots back, Carl Pettersson who finished fifth at 13 under, and Luke Donald, who tied for seventh at 11 under. Sixth-place finisher Zach Johnson already had an exemption into the field.

"I've been thinking about that tournament for a long time and really trying to look at a way to get in there," Harman said. "This one burns a little bit, but that definitely helps the sting."

The Travelers was the first of three PGA Tour events where finishers not already exempt can get into St. Andrews. There also are four spots available at The Greenbrier Classic and one at the John Deere Classic.

Rain forced a late start Sunday, and the players went off in threesomes from two tees. But the wet weather also created scoring opportunities, with players taking advantage of the soft greens to shoot for the pins.

Watson started strong with birdies on his first two holes, chiding a fan on the second hole who had suggested he go under a tree with a 4-iron. Watson used a wedge that he hit to 6 feet.

He seemed to lock up the championship on the 13th, where he sank a 39-foot putt for eagle, his longest made putt of the tournament.

His approach at 14 ended up 13-feet right of the pin, but his birdie putt ended up on the front lip of the cup.

"I was hoping nobody else would birdie, but Paul Casey decided he wanted to birdie some holes to make it interesting," Watson said.

Casey began the day tied for fourth but moved up quickly. His second shot at the 431-yard third hole bounced once from 126 yards out and went straight into the hole for an eagle.He also made a 64-footer for birdie on the par-3 eighth hole.

He made a 6-foot birdie putt on 16 and a 15-footer on 17 to stay in contention. Watson lost his lead after hitting his approach on 17 to the right of the hole behind two bunkers.

Both made par on the first playoff hole. On the second, Watson's tee shot went down the middle and Casey found bunkers on his first two shots.

"It does remind me of 2010, where coming down the stretch I had to hit some good shots and I didn't," Watson said. "I wish it was a lot easier, but a victory is a victory."

Watson led after the first two rounds but was a stroke back of Harman after Saturday. Watson becomes the fifth golfer to win this tournament since 2000 after leading or being tied for the lead going into the second round.

He also moved closer to his career goal.