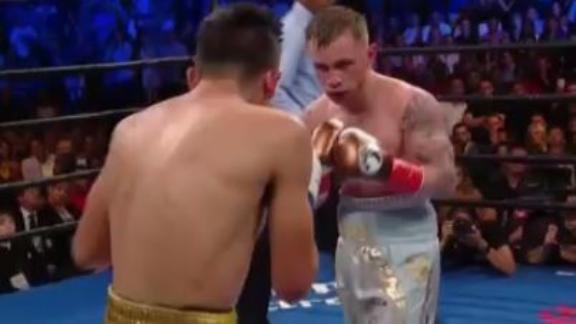 ESPN
By Dan Rafael
NEW YORK -- Carl Frampton outslugged Leo Santa Cruz in a fight-of-the-year contender to claim a featherweight world title by majority decision before an electric crowd of 9,062 on Saturday night at Barclays Center in Brooklyn.

Most of the fans cheered wildly for Northern Ireland's Frampton, who made history by becoming the first two-division titleholder from his country and the second Irishman to accomplish the feat.

Frampton unified junior featherweight titles in February by winning a split decision against British rival Scott Quigg, but that fight failed to deliver the kind of action most expected.That was not an issue on this night. Frampton (23-0, 14 KOs), who left the 122-pound division to move up to 126 pounds, and Santa Cruz (32-1-1, 18 KOs) waged an epic fight. In the end, it was Frampton who earned the close decision to join Steve Collins, who won middleweight and super middleweight belts in the 1990s, as the only Irishmen to win titles in two weight classes.

"It's a dream come true," said Frampton, who was fighting in the United States for the second time. "I had the dream of winning a world title and I won it, but I never thought I'd win in two divisions. It was a tough fight. I wanted it to be a tough fight because I wanted a fight the people could remember. I respect [Cruz] a lot. He was a true warrior."

The people surely will remember this fight-of-the-year candidate, along with the Francisco Vargas-Orlando Salido junior lightweight title fight and the welterweight title bout between Keith Thurman and Shawn Porter.

"It was a great fight. Last time I was here for a big fight, I was talking about a fight of the year. And then we just saw that. That was a fight of the year," said Lou DiBella, who promoted Santa Cruz-Frampton and Thurman-Porter. "Frampton fought a brilliant fight. I thought Santa Cruz came on in some rounds. I wouldn't have been surprised by anything. Frampton came in here and put on a show and Santa Cruz landed some bombs."

The 27-year-old Santa Cruz, as always, was extremely busy, but Frampton, 29, was more accurate and appeared to have more sting on his shots. According to CompuBox research, Frampton landed 242 of 668 punches (36 percent); Santa Cruz connected on 255 of 1,002 blows (25 percent).

"You have to look at Frampton and say this guy belongs on any pound-for-pound list," DiBella said. "He is brilliant. The work rate in that fight was unbelievable. I say that's fight of the year -- a war fought at that high skill level. Classic stuff."

Santa Cruz, also a former bantamweight and junior featherweight titleholder, was disappointed with the result that cost him his undefeated record.

"It was a tough fight from the beginning. We knew it was going to be a tough fight, but I thought it was close when I'm in there throwing," Santa Cruz said. "Maybe the judges were hearing the crowd and thought that every little punch was scoring."

Santa Cruz came into the fight riding a bit of an emotional roller coaster. He nearly pulled out of the fight because his father and trainer, Jose Santa Cruz, has been battling cancer. But the elder Santa Cruz insisted his son go through with the fight and then perked him up when his illness went into remission and he was well enough to join him in training camp and travel to New York.

After a somewhat tentative opening round, Santa Cruz and Frampton began to trade blows in the second round. Frampton, whose purse was $500,000, caught Santa Cruz with a clean left hook that staggered him and sent him toward the ropes. Santa Cruz recovered, and they continued to blast away at each other, combining to throw 160 punches in the round, according to CompuBox research.

Frampton kept the pressure on in the third round. He landed telling uppercuts and body shots against Santa Cruz, who appeared wary of the power. Santa Cruz, who earned $1 million, bounced back in the fourth round, when he began to find his distance and backed up Frampton with left hooks in an increasingly high-contact fight.

Santa Cruz also had a big sixth round during which they stood in the center of the ring and traded toe-to-toe.

The action rarely relented as they worked into the late rounds; both men laid leather on the other to the backdrop of a frenzied crowd. They came out for the 12th round firing huge shots, both seemingly feeling as though the fight was up for grabs. It was a wild atmosphere as they traded shots, both landing combinations in the middle of the ring as the crowd stood and cheered. The boxers combined to land 63 of 197 punches in the final round, and as the final seconds ticked down, they emptied their tanks, forcing referee Harvey Dock to separate them at the final bell.

Nobody was sure who had won when it was over.

"I had a good game plan," Frampton said. "[Trainer] Shane [McGuigan] was an unbelievable coach. He told me every time I came back into the corner that we could win this a lot easier. But I won it with my heart, not with my head, and I got my hand raised."

DiBella compared it to the classic fights between Marco Antonio Barrera and Erik Morales, who had a legendary trilogy between junior featherweight and junior lightweight.

"It was a hard fight to score because it was back and forth, back and forth, like Rock 'em Sock 'em Robots. They both took huge punishment. It was a classic fight," DiBella said. "It reminded me of Barrera-Morales."

Like those Mexican legends, perhaps Frampton and Santa Cruz will develop a similar rivalry because both embraced the idea of a rematch.

"It's hard to get your first loss, but now we'll go back to the gym, we'll get the rematch and we'll win, and that loss will mean nothing," said Santa Cruz, who was making the second defense of the vacant belt he won last August against Los Angeles rival Abner Mares. "I want to have a rematch in Los Angeles, but I'll go to Belfast, too.

"He has a difficult style, but we know his style and can get him in the rematch. The crowd was cheering, and I think the judges saw that and maybe, without that, we would have had a draw or maybe a decision."

Added Frampton, a big star in Northern Ireland: "I want big, memorable fights. I would love to take this man to Belfast for a rematch and show the people there what a great fighter he is."

And what great fights they can make.