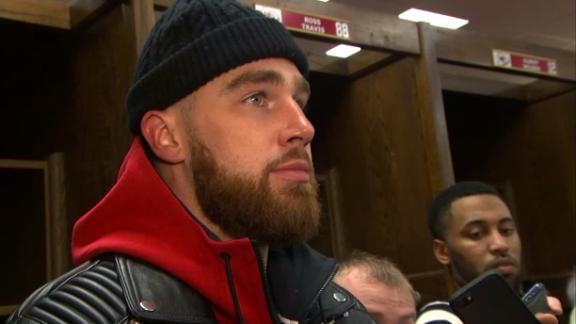 KANSAS CITY, Mo. -- Tight end Travis Kelce wasn't shy in his criticism of referee Carl Cheffers for the holding penalty on tackle Eric Fisher that cost the Chiefs what would have been the tying two-point conversion late in their 18-16 loss to the Pittsburgh Steelerson Sunday night.

The Chiefs failed to get the two-point conversion after being pushed back to the 12-yard line. Pittsburgh kept the ball for the rest of the game after the ensuing kickoff.

"For it to end like that, with the referee literally taking it out of our hands, that hurts," Kelce said. "You try to play this game with integrity, to the end of the whistle, and when the refs want to take over the game and make it their own platform, there's nothing you can do about it. That wasn't a hold on my guy Eric Fisher. I hope [Fisher] doesn't go the entire offseason thinking it was his fault. That was horses---, flat out."

Fisher sat at his locker for several minutes after the game with his head in his hands.

"Obviously, I'm frustrated with the call,'' the offensive lineman said. "With the game on the line, for me to let the team down, it's going to be a hard one for me to let go.''

Kelce said the Chiefs had put themselves in position with a successful last series.

"There was an unbelievable play called on the last drive," Kelce said. "Alexjust drove us down there [to] fourth down, making plays, making plays. Momentum is getting on our side, and we just get our jugulars ripped out because the refs felt bad for James Harrison falling on the ground."

Kelce sounds off on referees after loss
Chiefs tight end Travis Kelce is extremely upset after his team lost to the Steelers and voices his displeasure with the referees about the penalty call on offensive lineman Eric Fisher, which negated a successful two-point conversion.