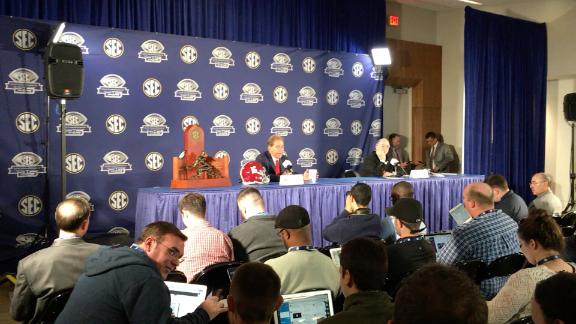 Still, when asked Friday about catching Bryant, Saban had no interest in discussing legacies.

"I haven't thought about it. I'm not thinking about it," Saban said. "I'm focusing on what can I do for our players so we can have a chance to win the SEC championship tomorrow. That's really all I'm focusing on.

"I've talked about, 'Be where your feet are.' I'm right here, right now. This is what's important and this is what we have to focus on."

Saban, who has a record of 111-18 in his 10 years at Alabama, needs a win over No. 15 Florida (8-3, 6-2 SEC) in the SEC championship game on Saturday and two wins in the College Football Playoff to earn his fifth national championship with the Crimson Tide.

As great as Saban's leadership has been during his time in Tuscaloosa, Saban chose to deflect the praise thrown at him back onto the players and other coaches who have helped No. 1 Alabama (12-0, 8-0) get into position.

"They've worked hard. They've done a lot," said Saban, who is riding a 24-game winning streak, tops in the nation. "The coaches and the players on this team have worked hard and they've contributed and deserve all the credit for all the success that this team has created for itself.

"Hopefully, we can just do enough to help them finish so that they can do something of significance that will define their legacy as a team."

The 65-year-old Saban was also asked if he'd given any thought to how long he'd like coach. Saban has more than 30 years of coaching experience, including 23 years as a head coach -- 21 in the college ranks and two with the NFL's Miami Dolphins -- but said one day he'll have to face his fear of age catching up with the quality of his coaching and his health.

"I want to do it as long as I feel like I can do a good job of it and I'm healthy enough to do it," Saban said. "That's always been what I've wanted to do. And as long as I can keep doing that, I'll be happy doing it."

While Saban could have plenty more years of head coaching left in him, he thinks one of his assistants is ready to get that same chance again. Saban said that offensive coordinator Lane Kiffin is "absolutely" ready to be a head coach again.

Saban praised Kiffin's ability to mold his offensive systems around his Alabama players during his three years with the Tide, despite working with three different starting quarterbacks. Kiffin was able to help Alabama's offense evolve from its normal run-first, pro-style and play-action attack to a more spread look that has featured a lot more zone-read in 2016.

Alabama's offense, which is led by true freshman quarterback Jalen Hurts, currently ranks first in the SEC in scoring (39.4 points per game) and is second in the league in rushing offense (245.9 yards per game) and total offense (479.6 YPG).

"Those are signs of tremendous maturity as a coach who is not just committed to a system, but is committed to doing things that he has to help players be successful," Saban said.

"I think he's proven when he was a head coach he had a reasonably good amount of success -- much more than I think he gets credit for -- and he's done a phenomenal job in the three years he's been with us."

Kiffin previously served as USC's head coach for three years, compiling a 28-15 mark before he was unceremoniously fired in September 2013 after a 3-2 start. He also went 7-6 during his only year as the Tennessee Volunteers' head coach in 2009. He also was the head coach of the NFL's Oakland Raiders for 20 games.

Kiffin reportedly has emerged as a candidate for the head-coaching vacancy at Houston and also is the top choice to join LSU coach Ed Orgeron as the Tigers' offensive coordinator.