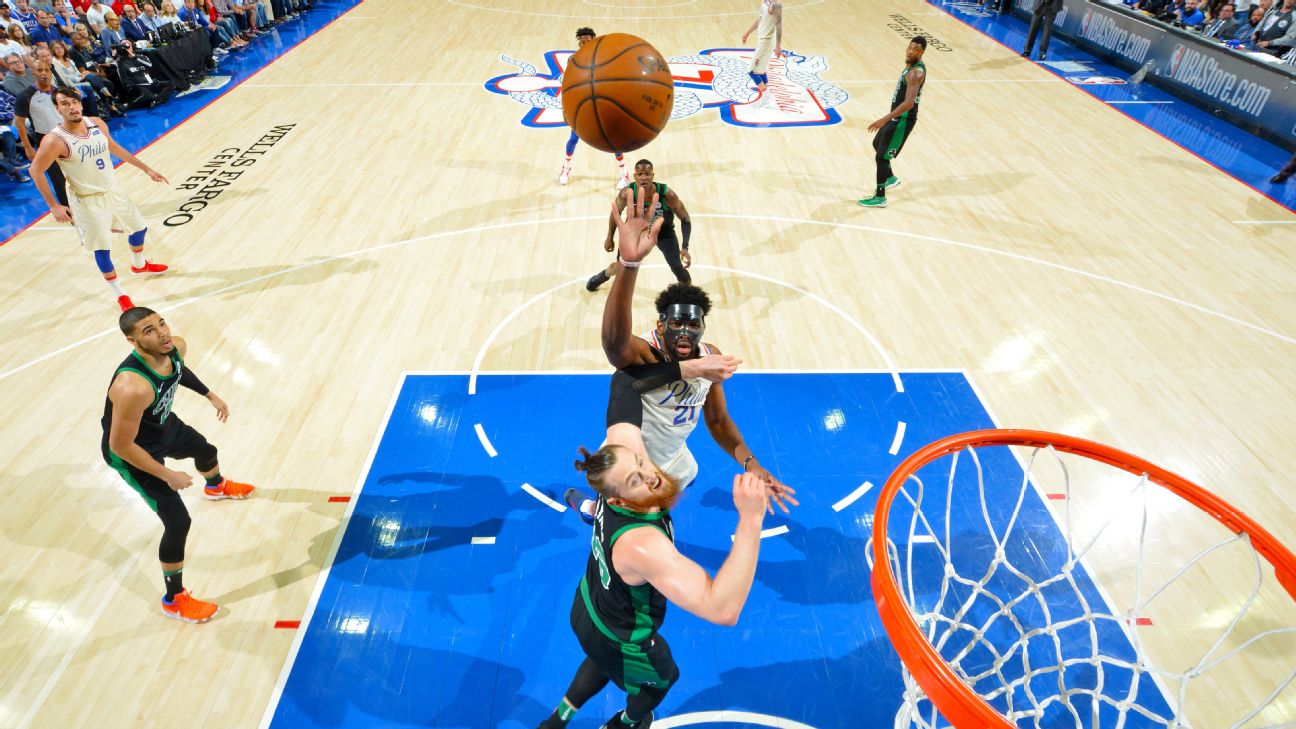 PHILADELPHIA -- The 76ers lost a winnable Game 3 to the Boston Celtics on Saturday because of what Joel Embiid labeled "dumb mistakes" in crunch time.

"It sucked to lose this way. I felt like we had control of the whole game," Embiid said after the Sixers' 101-98 overtime loss left them in a 3-0 deficit in the best-of-seven semifinal series. "We made a couple of bad mistakes at the end."

The first error was a turnover on aJJ Redick pass with eight seconds to play in the fourth quarter and the score tied.

There seemed to be some confusion between Ben Simmons, Embiid and Redick on the turnover late in regulation.Redick's pass was thrown without either Simmons or Embiid in position to receive it, and it ended up giving the Celtics a fast-break layup with 1.7 seconds to play.

"I was just reading [Marcus] Morris. He was overplaying, and I was trying to go behind the screen and look for the lob like we did against Miami [in the first round]," Simmons said. "I guess we were just on a different page."

Marco Belinelli bailed out the Sixers with a baseline jumper at the buzzer to tie the game. Then a few miscues in the final 20 seconds of overtime hurt Philadelphia's chances to win.

Simmons corralled an offensive rebound with 19 seconds remaining and Philadelphia clinging to a one-point lead. Instead of trying to kill some time or waiting for Boston to intentionally foul, Simmons shot immediately and missed a putback inside the paint.

The NBA Rookie of the Year candidate didn't second-guess his decision to shoot the putback.

"It was just natural instinct. That's a shot I take every practice, every game," he said. "Every day I take one of those, and I missed it. That's the game. You miss shots, and you make them. You win, and you lose."

The Celtics took a one-point lead on the ensuing possession via an Al Horford layup out of a timeout. On the next play, Simmons' inbounds pass to Embiid was stolen by Horford, whose free throws sealed the game.

"A lot of opportunities. A lot of mistakes were made," Simmons said. "And it's frustrating when you know what the mistakes are."

Sixers coach Brett Brown acknowledged that "our young guys at times look young" when talking about the late-game mistakes. But the coach didn't want to use the Sixers' inexperience -- four starters are playing in their first postseason -- as an excuse.

While Embiid owned up to his team's mistakes, he also pointed out that Horford wasn't called for a single foul while guarding him throughout the game.

"I don't see how it's possible for someone to guard me and have zero fouls. I thought a couple plays, it wasn't fair," he said. "But like I said, you gotta give Al a lot of credit. He made some plays for his team, and he got them the win. But like I said, I'm too big. I guess it's the playoffs, it's my first time here, so I'm learning, but I'm too big not to be fouled every time I go to the basket, every time I post up."

Simmons rebounded from a one-point performance in Game 2 with 16 points, eight assists and eight rebounds in Game 3. But his turnover and missed shot following the offensive rebound late in overtime were costly.

"I have a lot of growing to do," he said when asked what he has learned about himself in his first postseason. "This is the first time I've played in the playoffs, and I'm learning a lot. It's a great opportunity for myself and the team. We're all learning together. There's a lot of lessons. I think they're all very important."

Simmons, a 56 percent free throw shooter in the regular season, looked quizzically at a reporter who asked whether he'd be confident at the free throw line if he were fouled after getting an offensive rebound.

"I would've been confident in going to the line," he said.

If the Sixers rebound from their 3-0 series deficit to beat Boston, they'll make NBA history. Teams that lose the first three games in a seven-game series are 0-129 in those series.

Embiid not happy with the lack of calls
Joel Embiid believes the 76ers let one get away and praises Al Horford while lamenting the lack of fouls called on him.
Report a correction or typo
Related topics:
sportsespnpostseasonjoel embiidben simmonsgame 3overtimeeastern conferencephiladelphia 76ersboston celticsnbaplayoffs
Copyright © 2020 ESPN Internet Ventures. All rights reserved.
More Videos
From CNN Newsource affiliates
TOP STORIES