D'Angelo Russell on 76ers: 'Why wouldn't I want to be there?' 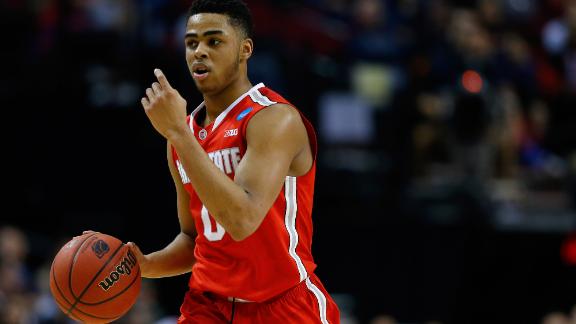 ESPN
By Mike Mazzeo
NEW YORK -- D'Angelo Russell said he would welcome the opportunity to play for the Philadelphia 76ers if they drafted him with the No. 3 overall selection in Thursday's NBA draft.

"It's a great place. Why wouldn't I want to be there?" Russell said Wednesday.

Russell, 19, had canceled a recent workout with the 76ers, fueling speculation that he did not want to be there.

But Russell said he missed the workout because he was sick, and he ultimately worked out for the team a week ago.

ESPN draft insider Chad Ford has Russell being selected No. 4 overall by the New York Knicks in his Mock Draft version 7.0.

The 76ers are currently in rebuilding mode and were dealt a blow recently when center Joel Embiid suffered a setback in his recovery from the broken foot injury that caused him to miss all of last season.

Russell confident heading into NBA draft
D'Angelo Russell sits down with Andy Katz to discuss why he is the best player in the draft, why he thinks he won't go No. 1 and where he would like to play.
Related topics:
sportsespnnbanba draftphiladelphia 76ersdangelo russell
Copyright © 2020 ESPN Internet Ventures. All rights reserved.
More Videos
From CNN Newsource affiliates
TOP STORIES