Darnell Dockett (ACL) out for season 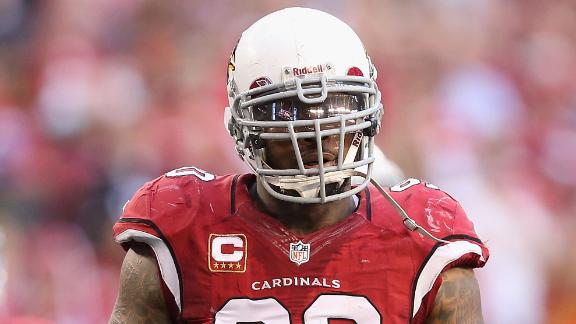 GLENDALE, Ariz. -- The Arizona Cardinals have confirmed the seriousness of the knee injury defensive tackle Darnell Dockett suffered during Monday's practice. The team said on Twitter that he tore his right ACL and needs season-ending surgery.

He suffered the injury about an hour into Monday's practice on a passing play during an 11-on-11 period. Dockett was carted off the field at University of Phoenix Stadium after being attended to by head trainer Tom Reed.

Dockett was helped to the cart by Reed and center Lyle Sendlein, who has been out with a calf injury.

Thank you all for your support & get well wishes. I really do appreciate it. This will be a tough road to recovery but I been through worst.

- DARNELL DOCKETT (@ddockett) August 19, 2014Before the extent of the injury was known, defensive tackle Calais Campbell talked about Dockett's importance to a defense that was ranked sixth in the league the past season.

"He's a great player, a guy we count on day in and day out to be a leader and take us where we want to go," Campbell said. "... Hopefully he'll come back soon."

Dockett's defensive line teammates didn't see exactly what caused the injury, but nose tackle Dan Williams guessed Dockett got his foot stuck in the ground. Campbell said he didn't see or hear what happened to Dockett.

While Dockett was lying on the ground, Campbell, quarterback Carson Palmer and wide receiver Larry Fitzgerald surrounded him.

Dockett has been a poster child for durability. He has missed just two games in his 10-year career -- both for injuries. He played in his first 104 games before a shoulder injury sidelined him in Week 9 of the 2010 season. He missed Week 4 in 2012 because of a hamstring injury.

Dockett, a three-time Pro Bowler who shares the Super Bowl sack record with Reggie White, is coming off his best season -- 59 tackles and 4.5 sacks -- in about five years.

Arizona could, at least, get a bit of good news later this week when safety Tyrann Mathieu is taken off the physically unable to perform list. He is coming back from surgery to repair a torn ACL and LCL.

"Praying for my brother," Mathieu said in a tweet.