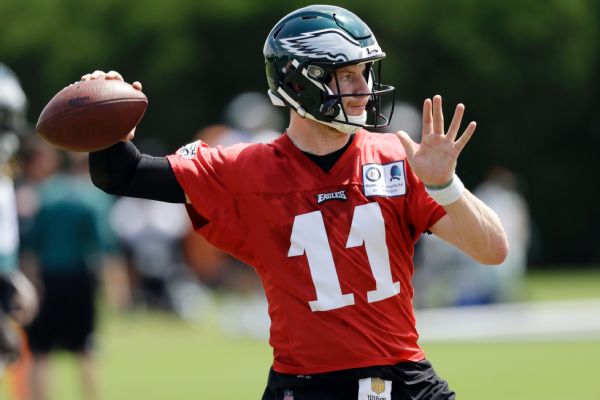 PHILADELPHIA --Eaglesquarterback Carson Wentz believes the decision of whether to play him in the season opener against the Atlanta Falcons is going to come down to the wire.

"I think there's been really no secret that it's going to be close," he said as the team wrapped up training camp Tuesday. "Seeing where I'm at in camp and finally, hopefully next week, doing 11-on-11, I think naturally it's going to be close. Ultimately, it won't be just my call or the coaches' call. It will come down to what the doctors say, really."

Wentz said that the plan is to ramp up his workload next week and have him participate in team drills once again. He had been taking part in 11-on-11 earlier in camp but the organization decided to pull back at the beginning of the month, opting to keep him in a more controlled environment and not expose him to unnecessary risk as he recovers from a torn ACL and LCL in his left knee. He has been restricted to individual and 7-on-7 drills for the past two weeks.

Wentz will be re-evaluated after Thursday's preseason game at the New England Patriots to get a clearer sense of where he is physically and what he'll be able to do moving forward, according to coach Doug Pederson.

"We'll sit down after this game and get together with our medical team... and we'll discuss the next step in his progression," Pederson said. "I'm excited to see where he's at health-wise. He's done a nice job out here already in these last couple of weeks so I'll be curious to see where it goes from here."

The last significant hurdle that remains is being medically cleared for contact. The timing of that step will help determine whether Wentz will be able to suit up against the Falcons on Sept. 6.

"It's getting close," Wentz said when asked about getting cleared, "and we're going to be close [for Week 1]."

If he can't go, Super Bowl MVP Nick Foles will get the call at quarterback. He has been working with the first unit just about all summer. Pederson expects Foles, who was sidelined for the preseason opener against the Pittsburgh Steelers with spasms in his neck/trap area, to see action Thursday against the Patriots.