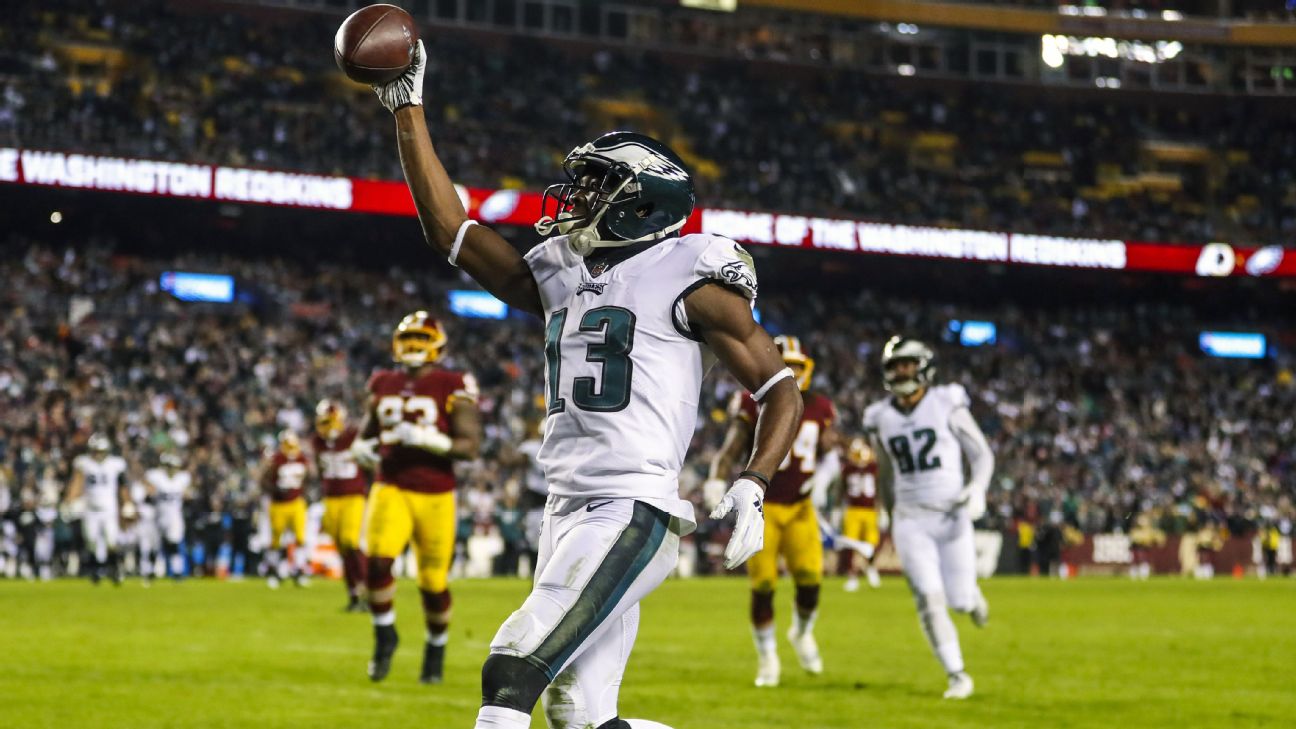 LANDOVER, Md. -- The defending champs are in the dance.

The Philadelphia Eagles got the break they needed Sunday, as the Chicago Bears beat the Minnesota Vikings 24-10. That, coupled with their 24-0 win over the Washington Redskins, gave the Eagles the sixth and final playoff spot in the NFC.

It sets up a wild-card matchup between the Eagles and the team that gave them an assist, the third-seeded Bears, in Chicago.

"I mean, there was a lot of excitement, a lot of jubilation in the locker room, and I just told the guys, 'Congratulations, we're in the postseason,'" Eagles coach Doug Pederson said. "I told them, 'You set out to get yourself into the tournament.' They've done that and we just got another opportunity next week."

Philly's win over Washington came at a cost. Quarterback Nick Foles exited in the second half with a chest injury and did not return. Nate Sudfeld stepped in and finished the game. A source told ESPN's Adam Schefter that the team believes Foles has bruised ribs and will be OK.

Foles said that he is sore and that Monday will be a "big day," as he is set to undergo further testing.

"I'm optimistic," Foles said of his chances of playing next week. "I feel like we'll get this thing situated, and my goal is to be out there and play."

Foles has been red hot since taking over for Carson Wentz, who was diagnosed with a stress fracture in his back in Week 15.

That hot streak continued against Washington before Foles was sidelined. He completed 25 consecutive passes, tying a mark shared by Philip Rivers and Ryan Tannehill for most consecutive completions in NFL history. Foles finished 28-of-33 for 221 yards with two touchdowns and an interception.

Wentz is still on the active roster, allowing for at least the possibility that he plays again this season.

Philly's defense ensured that the game was never close. It yielded just 89 total yards and limited Josh Johnson to 12-of-27 passing. Washington went 0-for-9 on third down. The Eagles dominated time of possession 43:19 to 16:41.

It felt like a home game for the Eagles, with green filling more than half the seats at FedEx Field. With the game in hand, attention turned to the Bears-Vikings. Loud chants of "Let's go, Bears!" broke out as Chicago got deep in Minnesota's red zone midway through the fourth quarter. The crowd erupted when word spread that the Bears had scored, giving Chicago a 21-10 lead.

The Eagles were already in their locker room by the time the Bears-Vikings went final. The celebration began in earnest once the clock hit zero.

"We ain't sneaking in -- we're kicking the m-----f---ing door down," safety Malcolm Jenkins said during his postgame speech to the players. "We're in this party. Nobody wanted us in, but guess what, they've got to deal with us now, man."

Another uninspiring start proved fatal for the Vikings, whose playoff hopes hung in the balance in Week 17, needing a win over the Bears to clinch the last spot in the postseason. The first half couldn't have gone any worse for the Vikings, who averaged 1.96 yards per play, their lowest output in a first half this season.

A half that began with five straight possessions resulting in punts ended with Kirk Cousins and Adam Thielen caught in an animated exchanged on the sideline after Minnesota was forced to settle for a field goal after the quarterback missed his wide receiver near the end zone. The Vikings entered Sunday's blowout loss with the league's No. 1 third-down defense. Chicago converted on eight of 13 third downs, including the Bears' final touchdown drive in the fourth quarter that ate up over nine minutes and included four third-down conversions. A season that started with Super Bowl expectations for Minnesota ended up with the Vikings finishing 8-7-1.

Earlier this week, defensive end Brandon Graham predicted that the Eagles would beat Washington and the "universe" would help get them into the playoffs.

"We're about to make a run," Graham said.