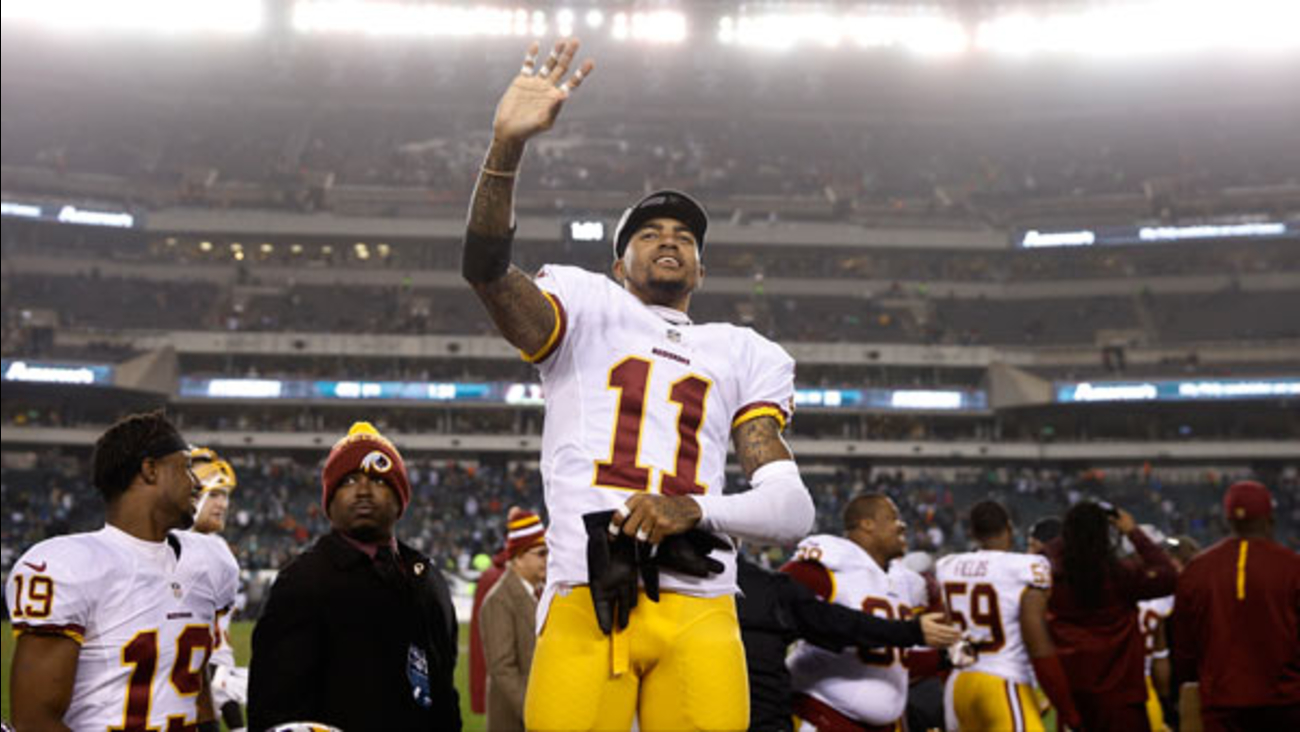 Washington Redskins' DeSean Jackson waves to the stands during the second half of an NFL football game against the Philadelphia Eagles, Saturday, Dec. 26, 2015, in Philadelphia. (AP Photo/Matt Rourke)

PHILADELPHIA -- A source close to DeSean Jackson believes the wide receiver would be "intrigued" by a possible return to Philadelphia, and that the Eagles will be in the conversation this offseason should Jackson hit the open market.

ESPN's Adam Schefter reported Sunday that the Eagles are likely to pursue a reunion with Jackson, who is in the final year of his contract with the Washington Redskins. The Eagles and Redskins meet Sunday at Lincoln Financial Field.

The circumstances surrounding the split with the Eagles following the 2013 season wounded Jackson. He was coming off a career year in which he posted 82 catches for 1,332 yards and nine touchdowns. Despite that production in the first year of Chip Kelly's tenure, the head coach decided he did not want to move forward with Jackson. Following unsuccessful attempts to trade him, he was released minutes after a story was published on NJ.com alleging that Jackson had gang ties that the team found troubling.

On a conference call with Philly media back in October, however, Jackson suggested he harbored no ill will toward the Eagles, a notion that has been backed up by some in Jackson's inner circle privately.

"I never really had hard feelings toward Philadelphia. Besides being released by whoever released me, I mean, that's different. But I guess he's not there no more," Jackson said with a laugh, referencing Kelly. "It's never really been hard feelings to the city, to the team, to the organization. But things happen and we move on."

The Eagles are in desperate need of help at wide receiver. Their top outside options -- Dorial Green-Beckham and Nelson Agholor -- rank 111th and 132nd in receiving yards, respectively. It is a top priority within the NovaCare Complex to provide quarterback Carson Wentz with better weapons, and Jackson, who ranks eighth in the NFL at 16.5 yards per catch, would give the group an immediate talent boost while providing a legitimate deep threat the current team desperately lacks. The big question is how much longer Jackson will be able to provide that service given that next season will be his 10th in the NFL.

Jackson caused his share of headaches during his six seasons in Philadelphia, and it's fair to assume that the idea of revisiting that relationship would not be met with universal approval in the building. But, per Schefter's report, he has an admirer in head coach Doug Pederson, and the decision-making is ultimately in the hands of a select few, including executive vice president of football operations Howie Roseman, who was part of the management group that re-signed Jackson to a big deal in 2012 and might not mind reversing another one of Kelly's moves.

For both sides, it will come down in large part to the price tag, obviously. That will drive most conversations to a large extent. But Jackson is also expected to weigh other factors, including quality of the quarterback situation and the level to which he will be featured in the offense.
"Hopefully I'll still be here in Washington and not have to really worry about that," Jackson said back in October when asked about rejoining the Eagles, "but you never know how this industry, this business turns out."

The 30-year-old Jackson has grown roots in the D.C. area. His girlfriend is there, as is his 1-year-old son, who is said to have matured him. He is apparently in a good place in his life, and some would be perfectly content if Jackson found a way to remain in this environment and stay with the Redskins.
It seems likely that other teams will come into play this offseason, however. If Philly does come calling, it could very well turn out that the interest is mutual.
Related topics:
sportsaction news sportsphiladelphia eagles
Copyright © 2022 ESPN Internet Ventures. All rights reserved.
TOP STORIES
AccuWeather Alert: Snowy Thursday Morning Commute
Police: Gunman arrested after holding teen hostage during standoff
Woman beaten to death with 2 pipes inside office building
Woman stuck in bathroom for days gets saved by neighbor
Watch NatGeo documentary 'The First Wave' free for 48 hours
PennDOT ready for another round of snow
Embiid ties career high with 50 points, 76ers beat Magic
Show More
Voting bill collapses, Democrats unable to change filibuster
2 dead, 3 firefighters injured in South Jersey crash
Philly officials announce increase of violence prevention resources
Supreme Court allows Jan. 6 committee to get Trump documents
US to distribute free at-home tests, N95 masks: What you should know
More TOP STORIES News