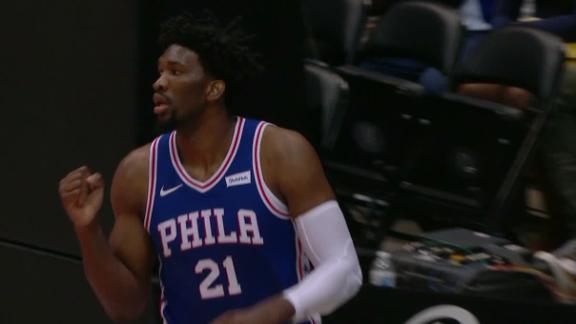 Joel Embiid, playing for the first time since agreeing to a five-year, $146.5 million extension, scored 22 points in his preseason debut for thePhiladelphia 76erson Wednesday night.

Embiid's impressive stat line came in just 15 minutes of action in the Sixers' 133-114 winover the Brooklyn Nets. Of his 22 points, 14 came from the free-throw line. Embiid also added seven rebounds.

"I didn't expect that, but I've been working hard all summer," Embiid said. "I didn't have a lot of time on the court. So I feel like I'm still behind. But with repetition, it's going to come."

Embiid has been eased back into action for Philadelphia after having surgery March 24 for a meniscus tear in his left knee. He hadn't played in a game since Jan. 27.

"It's just a very potent offensive package that people sort of have to game-plan for," Sixers coach Brett Brown said of Embiid. "We see the impact that he makes on the defensive end and all over the place."

Embiid agreed to the rookie-scale max extension Tuesday, with the $146.5 million total for the deal based on the NBA's new salary-cap projections for the 2018-19 season. The new deal protects the franchise financially should Embiid suffer a contractually specific catastrophic injury, league sources told ESPN.

"Something like tonight will remind us all that's why he was paid what he was paid," Brown said.

His brief but dominant debut season left him as the only rookie since Wilt Chamberlain to average at least 28.7 points per 36 minutes played.