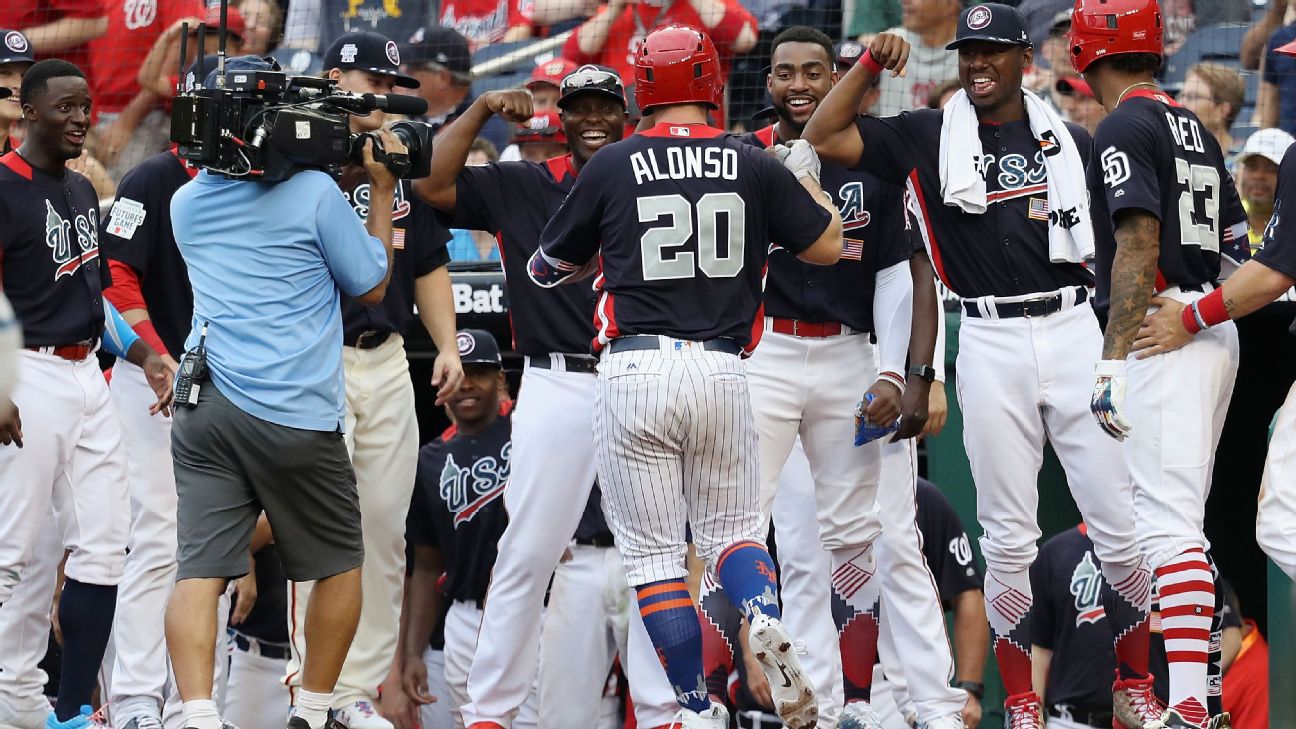 WASHINGTON -- Touki Toussaint was about to settle down for his pregame nap when Atlanta Braves director of player development Dom Chiti called.

Chiti was calling earlier this weekend to ask the highly touted pitching prospect if he'd like to play in the All-Star Futures Game. But this time of year, Toussaint and minor leaguers all over baseball are right to wonder when the phone rings.

Before Manny Machado arrived for the All-Star Game, the Futures Game on Sunday was a who's who of prospects bandied about in trade talks for the Baltimore Orioles shortstop and others expected to be moved before the July 31 non-waiver deadline. New York Mets prospect Peter Alonso hit one of eight home runs in the game as the United States beat the World 10-6 in a three-hour respite from the rumors.

"There's definitely a lot of talk going around with trades and all that,'' said Milwaukee Brewers second baseman Keston Hiura, who has been mentioned as a possible trade chip for Machado. "There's always questions of who's getting moved and all that. ... Whatever happens talking-wise or behind the scenes, that's out of our control."

A couple players in this game already know what these guys are going through. Luis Basabe went to the Chicago White Sox in the trade that netted the Red Sox lefty starter Chris Sale, and Dawel Lugo was part of the haul the Detroit Tigers got from the Arizona Diamondbacks for J.D. Martinez.

Alonso's seventh-inning home run came off Philadelphia Phillies right-hander Adonis Medina, whose wild pitch on a strikeout allowed the go-ahead run to score. Medina has also been linked to Machado, with the Phillies showing serious interest.

New York Yankees pitching prospect Justus Sheffield allowed a home run and had a strikeout in 1 1/3 innings of work. Sheffield is considered untouchable, even with the Yankees trying to catch the Boston Red Sox in the AL East.

The Los Angeles Dodgers have plenty of prospect ammunition to get in on the Machado sweepstakes, including catcher Keibert Ruiz and outfielder Yusniel Diaz. Ruiz and the Dodgers got a scare when he injured his right hand on a foul tip in the seventh inning, but he said X-rays showed that it was not broken.

"I was very worried,'' said Diaz, who hit two home runs for the World. "He's a good teammate, and at this point, we're almost like brothers, so I was very concerned.''

Injuries are reason for concern, but Brewers pitching prospect Luis Ortiz doesn't worry about being traded after going from Texas to Milwaukee at the deadline two years ago.

"Being traded the first time caught me really off-guard, especially when I was with Texas, 19, 20 years old in Double-A,'' said Ortiz, who got the final out for the U.S. on Sunday. "But now that [there's] another trade talk, and my name's getting brought up more and more in trades and Keston, it's more like you want to keep an eye on it, but then at the same time, you've got to let it go, do your thing.''

A conversation with Matt Garza also settled Ortiz's mind when the longtime major leaguer told him to pitch for the Brewers and any other teams watching. His advice to Hiura is to ignore social media, but players know that's easier said than done.

"I get tagged on Twitter 24/7,'' said Toussaint, who was traded from Arizona to Atlanta three years ago. "I don't pay attention to it. I just go out there and try to win games for my team.''

While U.S. manager Torii Hunter was beating close friend, former teammate and World manager David Ortiz, he was so impressed by Alonso's home run that he invoked another retired power hitter.

"That is some Mark McGuire-type stuff,'' Hunter said. "I won't forget that name.''

Cincinnati Reds prospect Taylor Trammell had a home run and a triple and was picked as the MVP. His bat is going to the Hall of Fame in Cooperstown, New York.

With the Mets and Reds looking to sell and get younger, Alonso and Trammell can breathe easily for the next couple of weeks. Prospects playing for contenders try to look at it as a positive that they're sought-after commodities.