Hope Solo's husband comes to her defense: 'It is a witch hunt' 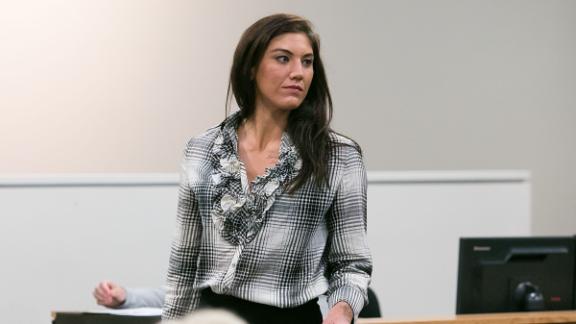 Hope Solo hasn't spoken much to the media since the World Cup has gotten underway, but her husband, former NFL player Jerramy Stevens, did some talking for her in an interview Saturday with USA Today Sports.

"It is a witch hunt, you can put that in the paper," Stevens said of the ongoing domestic violence controversy surrounding the U.S. women's goalkeeper.

Stevens spoke to the newspaper atWinnipeg's James Armstrong Richardson International Airport, where he was about to board a plane to Vancouver for the United States' final World Cup group match on Tuesday.

"It's not hard for me because I know Hope can handle it," Stevens said. "I think that what's hard is that she's the victim of something that was really scary and a really unfortunate incident. [She] being classified even remotely close to Ray Rice and these other domestic violence incidents is ridiculous and outright wrong."

Earlier in the week, ESPN's "Outside the Lines" reported that Solo was combative with officers after her arrest last year on accusations that she assaulted her half-sister and her teenage nephew, an incident during which authorities described Solo as the "primary aggressor.''

Solo initially faced two misdemeanor counts of domestic violence in the altercation at her half-sister's house last June, although those charges were dismissed on procedural grounds earlier this year. Solo pleaded not guilty and portrayed herself as a victim in interviews after the dismissal of the case.

"Outside the Lines," citing police records, two sworn depositions and interviews with one of Solo's accusers, reported Solo had been drinking when she arrived at the home of her half-sister, Teresa Obert, and was the aggressor in the altercation, including slamming the teenager's head into the floor.

OTL also reported Solo was so combative after her arrest that she had to be forced to the ground by police and that she insulted officers.

Solo said she was "perfectly focused" after the U.S. beat Australia in the team's opener last Monday, but otherwise has not publicly commented on the report, which Stevens referred to as "low class" and "nothing less than unpatriotic."

"She doesn't need to defend herself," Stevens told USA Today Sports on Saturday. "She's in the right. I think that gives her strength because she doesn't feel like she's done anything wrong and it's just unfortunate because they've made an issue out of something and there was no new information presented. None whatsoever. All of those [details] were available.

"[People] put females in a box and want them to stay there and look pretty. Hope refuses to be put in that box. She wants to be treated as an equal. That's not the case as we can see."

Senator Richard Blumenthal blasted U.S. Soccer on Thursday for its investigation of Solo and the incident. U.S. Soccer president Sunil Gulati defended the federation's investigation Friday, saying that it viewed the case as "he said, she said" and was waiting for the resolution of the criminal charges against Solo before issuing any discipline.Although the charges were dismissed in January, the prosecutor is appealing.

In January, Solo was suspended 30 days by U.S. Soccer after Stevens was arrested on suspicion of driving under the influence while operating a team vehicle. Solo was a passenger in the vehicle.

Stevens and Solo have been married since November 2012. They got married a day after Stevens was arrestedfor fourth-degree domestic violence assault stemming from an altercation with Solo. He was not charged.