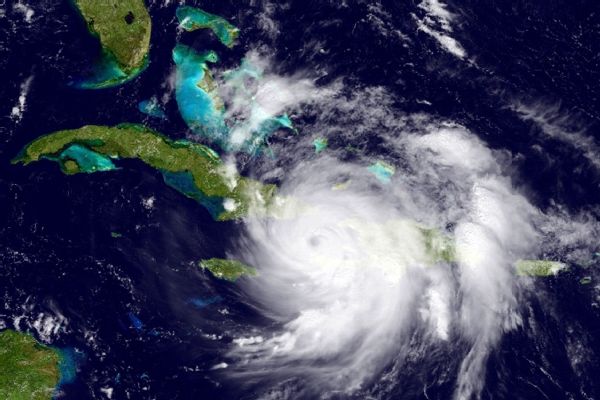 Miami and Florida are still set to host football games on Saturday as Hurricane Matthew marched toward Florida, Georgia and the Carolinas late Wednesday.

The 10th-rankedHurricaneshave not made a decision to cancel or postpone Saturday night's home game against No. 23Florida Stateon ABC.

Matthew was a dangerous and life-threatening Category 3 storm with sustained winds of 120 mph as it passed through the Bahamas on Wednesday, and it was expected to be very near Florida's Atlantic coast by Thursday evening. It is expected to make its way up the East Coast.At least 16 deaths in the Caribbean have been blamed on the storm, with heavy damage reported in Haiti.

"I don't know what we'll do, to be honest with you," Miami coach Mark Richt said. "Just keep everybody safe first. We'll do the best we can."

Florida State is scheduled to fly in Thursday night for the Miami game, though forecasters say Thursday could be the day when the Miami area absorbs the worst of Matthew's wind.

As of Wednesday afternoon, the game is still on. Miami's athletic director Blake James said in a statement, "We are monitoring Hurricane Matthew, and are in constant contact with stadium personnel. We are hopeful that the impact of Hurricane Matthew will be minimal and the game between the Hurricanes and Seminoles will be played as planned."

"A final decision on the start time of the game will be made by 1 p.m. on Thursday as we continue to monitor the storm," the school said in a statement Wednesday. The game's scheduled start time is noon atBen Hill Griffin Stadium.

UF officials said they are working closely with local and state officials, as well as the SEC office, to monitor the hurricane's progress and its potential impact on campus and the safety of the fans.

South Carolina officials said theGamecocks' game againstGeorgiathis weekend will be played in Columbia, althoughtheyacknowledged the date and time could change because of impending impact of the hurricane.

The school said in a statement the "USC vs. UGA game will be played in Columbia."

Officials said they are monitoring Matthew's track and will most likely make a decision on any changes Thursday. The school said it was communicating with the National Weather Service, the SEC and state and local authorities.

Gov. Nikki Haley said the school was told Wednesday the state would not be able to spare personnel to help with a football game. Dozens of state troopers routinely help with traffic at Williams-Brice Stadium, which seats about 80,000.

South Carolina senior associate athletic director Charles Bloom told Columbia radio station 107.5 WNKT-FM it's possible the game could be played Sunday or Monday if necessary, with safety being the primary concern at this point.

"We're not going to risk people's lives, and take emergency people away from people who really need them, in order to host a football game," Bloom said.

Meanwhile, football games elsewhere in Florida were postponed, other events were canceled and contingency plans were being made. On Wednesday, the UCF Knightsdecided to postpone their game against Tulaneuntil Nov. 5. The contest was scheduled to be played Friday night in Orlando.

"Taking into account all the latest projections for Hurricane Matthew, we have to keep the safety of everyone involved in these events at the forefront of our decision-making," UCF athletic director Danny White said in a statement. "We appreciate our friends at Tulane and Houston understanding and working with us through this situation."

Saturday's game between Florida Atlantic and Charlotte in Boca Raton will not be played Saturday and has tentatively been moved to Sunday, pending further assessments.

Schools in Florida, Georgia, South Carolina and North Carolina have either postponed or canceled some soccer, volleyball and other college contests scheduled for the next few days.

Two other college football games -- Albany State at Charleston Southern and Bethune-Cookman at South Carolina State -- have already been postponed.

The Miami Heat, who arrived home Tuesday night after a 106-95 victory over the Washington Wizards in their preseason opener, decided to fly to Houston on Wednesday night to resume preseason workouts, according to a team spokesman.

The Heat will use the Houston Rockets' practice facilities before Saturday's preseason game against theMinnesota Timberwolves in Kansas City. The Rockets are traveling to China for two preseason games.

TheTampa Bay Lightning's preseason game against theFlorida Panthers, which was scheduled for Thursday, has been canceled atBB&T Center. The arena, which is outside of Miami, is under hurricane watch. The Panthers are scheduled to fly to West Point, New York, on Friday,but if winds close airports in the Miami area, those plans would be affected.

The Miami Dolphins are scheduled to host the Tennessee Titans on Sunday, and officials are keeping a close watch. The Dolphins, who already had planned not to practice Thursday, will close their team offices to give players and coaches extra time to prepare for the storm.

"We're watching the weather with the hurricane that's going on down there," Titans coach Mike Mularkey said Tuesday on his radio show. "There may be some weather issues. There's a very slight chance that game could be moved up here. There's been some discussion because of it."

The ACC, which could have at least five Saturday football games directly affected by the storm, said it was monitoring Matthew closely and hoped games would be played as scheduled.

Other Saturday ACC games that figure to be affected include Army at Duke, Virginia Tech at North Carolina, Syracuse at Wake Forestand Notre Dame at NC State.

"Everything is on the table right now," Kelly said.