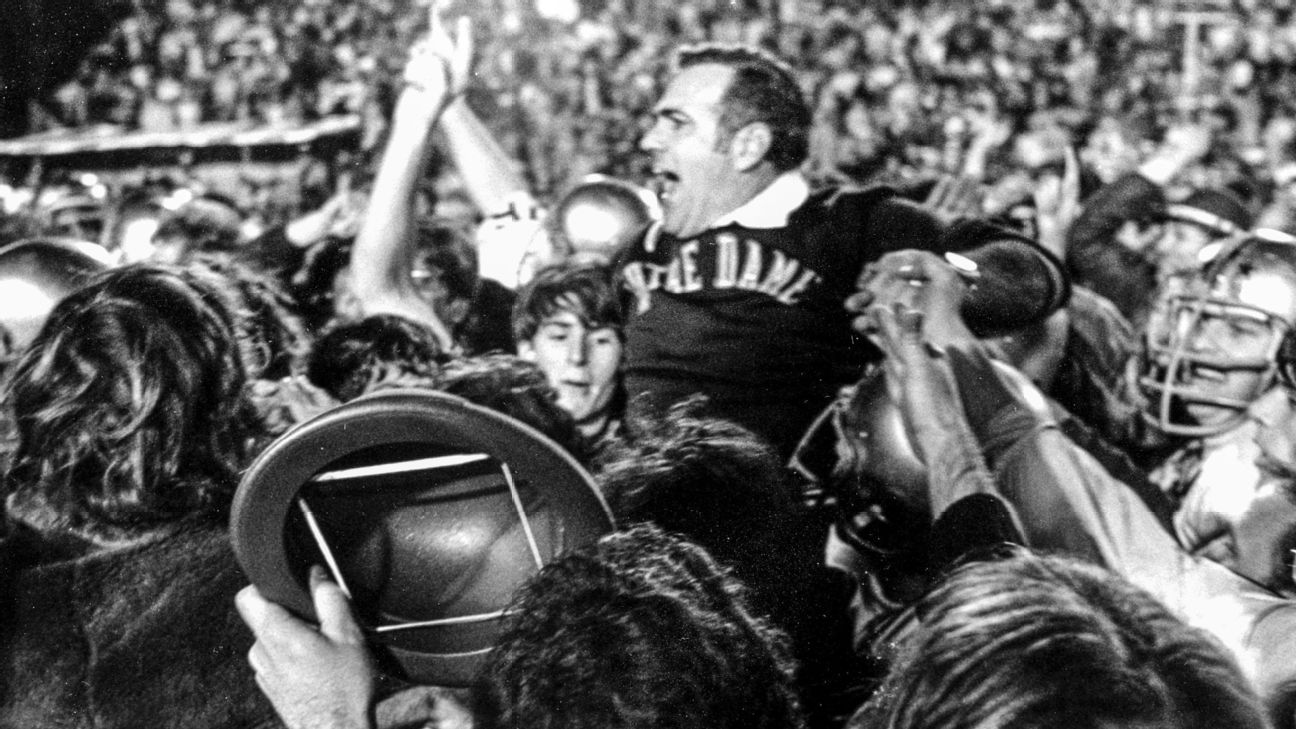 We really aren't asking for a lot. We want good on good, as coaches say. We want the best playing the best. We want blueblood on blueblood, too. We want recognizable names, traditional powers.

OK, we're asking for a lot, at least based upon what we've gotten.

History tells us that we are lucky if a season gives us two undefeated teams of any pedigree. Occasionally we get more; most of the time, less.

We quickly learned to take for granted that the College Football Playoff will determine the national champion, settle the issue between the Tigers from the Death Valley of your choosing after already dispatching with an Ohio State team that went through the season undefeated in a semifinal game. Think of the war of words that would be waged were undefeated LSU committed to the Sugar Bowl, undefeated Clemson to the Orange, and undefeated Ohio State to the Rose. Until the past couple of decades, that is more or less how college football lived.

But as I say, odds are at least one of those three teams will falter before we set the postseason lineup.

When Alabama, Clemson and Notre Dame reached the playoff last year with spotless records, that was the first time in the five-year history of the College Football Playoff in which more than one team made it to the playoff unbeaten. Clemson beat the other two, and the debate ended.

Imagine the debate if we had more than three unbeaten teams. Imagine the cacophony if we reached the end of the regular season, and six teams had yet to lose. And not just any six teams, but six of the bluest-blooded programs that ever laced up their cleats.

Actually, you don't have to imagine it. In 1973, Alabama, Michigan, Notre Dame, Ohio State, Oklahoma and Penn State all made it into bowl season without a loss.

Think about that for a minute. The party crasher in that group is Penn State, which, in 1973, hadn't yet established the national credibility to overcome a welterweight schedule amid so many heavyweights.

The coaches of those six teams -- Bear Bryant, Ara Parseghian, Barry Switzer, Joe Paterno, Woody Hayes and Bo Schembechler -- combined to win 1,531 games over 185 seasons. They won 17 national championships, although (spoiler alert!) that gives Bryant and Parseghian each full credit for the title they split in 1973.

Six unbeatens added up to college football's version of a solar eclipse. Oklahoma hadn't been undefeated since 1956; Notre Dame, since 1949. And, of course, it took a special circumstance -- a tie -- for Ohio State and Michigan both to finish undefeated.

Yes, ties, the unsatisfying finish that the NCAA abolished for good in 1996. Ties contributed to three of the six unbeaten records in 1973. In addition to No. 1 Ohio State and No. 4 Michigan finishing in a 10-10 tie, Oklahoma tied then-No. 1 USC 7-7 in the second week of the season.

By the end of October, these six teams already had separated themselves from the field. Only one other major team, LSU, made it to November undefeated, and the No. 7 Tigers lost to No. 1 Alabama 21-7 on Thanksgiving Day.

By then, Alabama and Notre Dame had agreed to play in the Sugar Bowl. The two traditional powers had never played each other, and the Irish, who had returned to postseason football only four seasons earlier, had yet to play in the New Orleans game.

Oklahoma had far and away the toughest schedule of the six unbeatens. The Sooners defeated six ranked opponents in addition to tying USC in Los Angeles. None of the other five unbeatens played more than three. Oklahoma also got better as the season wore on. On Thanksgiving Friday, the Sooners whitewashed No. 10 Nebraska 27-0. The Huskers never made it past midfield.

But the Sooners would be hamstrung by the NCAA. As part of their probation for recruiting violations, Oklahoma could not play in a bowl game.

Thanksgiving Saturday marked Year 5 of the Ten-Year War: The irascible Hayes of the Buckeyes and his protégé, the combustible Schembechler of the Wolverines, had made the renewal of the Ohio State-Michigan rivalry a national holiday on the college football calendar.

Both teams had played well all season, even as they always had one eye focused on each other. After Ohio State opened the season with a 56-7 victory over Minnesota, Gophers coach Cal Stoll said of the Buckeyes: "They're no longer three yards and a cloud of dust. Now they're 12 yards and a mass of humanity."

Ohio State had won every game by at least 24 points. Michigan had won all of its games by at least 14 points with a defense so good that it once went 15 consecutive quarters without giving up a point.

The 10-10 result created a firestorm, although it didn't ignite until the following day. The Big Ten, of course, pledged its champion to the Rose Bowl. But in 1973, the Big Ten didn't allow any other teams to play in bowl games. The conference championship meant everything. As co-champions who had tied each other, the tie in the standings, by league rule, had to be broken by a vote of the 10 athletic directors.

Michigan had dominated the second half of the game, so much so that afterward, even Hayes, his face fallen, his hand trembling, said, "We knew we had to win to go and we didn't."

However, the athletic directors voted 6-4 for the Buckeyes. Some believed they voted against Michigan because Wolverines quarterback Dennis Franklin broke his collarbone in the fourth quarter. The more conspiratorial believed the athletic directors settled scores, either against their Michigan colleague, Don Canham, a wily promoter who openly derided the lack of imagination among his Big Ten brethren; or in Michigan State's case, that Michigan had voted against extending a conference invitation some two decades before.

Whatever the reason, Schembechler never forgave the rest of the league. Four days before his death in 2006, at a Michigan football news conference the week of the Ohio State game, Schembechler said, "They literally screwed us out of the Rose Bowl -- and I mean it just exactly the way I said it," as if anyone within earshot could doubt him. Schembechler called it "the greatest disappointment" of his four decades in coaching.

On Dec. 1, the final Saturday of the regular season, Notre Dame went to Miami and routed the Hurricanes 44-0 three weeks after Miami had lost at Alabama 43-13. Miami also had lost narrowly 24-20 to Oklahoma earlier in the year. After the loss to the Irish, Miami coach Pete Elliott ducked the obvious question of which opponent was the best.

"You'll have to rate that one yourself," he said.

"And as far as I'm concerned," Jordan said, "they are one of the very best teams I've ever seen in my 42 years of college football."

The game had been so one-sided that Bryant used 72 players. He called his constant substitutions "directing traffic." That's one fewer player than Alabama used in the season opener, when it humiliated California 66-0 and at midseason embarrassed Virginia Tech 77-6. The Tide, in its third year of the wishbone offense, gained 828 yards of total offense against the Hokies, and four different backs rushed for more than 100 yards.

Notre Dame, on the other hand, made it through the season unblemished on the strength of its defense. The Irish didn't give up more than 15 points to anyone all season.

In 1973, the media waited until after the bowls to take their final vote. The coaches did so at the end of the regular season. On Tuesday, Dec. 4, Alabama finished No. 1 in the coaches poll, so the Tide took home half of the national championship. That news did not reach the readers of The South Bend Tribune.

On the day after the polls came out, the Tribune headline read, "Irish Climb to Third in Football Ratings." The story pointed out that Notre Dame had moved to third in the media poll, and fourth in the coaches poll, but made no mention that the coaches had declared Alabama No. 1.

America believed that the media would award its national championship to the Sugar Bowl winner, unless the game lacked so much luster that the voters would turn to No. 2 Oklahoma, sitting at home. Luster, as it turned out, showed up in Tulane Stadium on New Year's Eve in abundance.

After six lead changes, after Notre Dame's Al Hunter returned a kickoff for a touchdown, after Alabama kicker Bill Davis missed an extra point attempt in the fourth quarter, after Notre Dame quarterback Tom Clements, on third-and-8 from the Irish 3 with a shade more than two minutes to play, dropped into his end zone and threw a 35-yard pass to backup tight end Robin Weber, who had caught one pass all season, Notre Dame won 24-23.

Birmingham Post-Herald writer Herby Kirby filed his story and collapsed, dead from a heart attack. Nearly half a century later, the 1973 Sugar Bowl remains one of the greatest games in the history of the sport.

The next day, New Year's Day, Ohio State routed USC in the Rose Bowl 42-21, and Penn State defeated LSU 16-9 in the Orange. But those games took place in the shadow of the game the night before. Notre Dame easily won the final media poll for the other half of the national championship.

"By the time we got to Notre Dame in the Sugar Bowl I about had myself convinced that it was the best offense I ever had, no matter what the formation," Bryant wrote in his autobiography. "I'd have said it was the best, period, but Notre Dame beat us, 24-23, coming from behind three times to do it, and since we didn't win I can't call it the best anything."

Bryant recounted how he had received a gracious letter from Parseghian, the only one he ever received from a coach who had defeated him (there hadn't been many). "I don't really consider it a loss," Bryant wrote. "We just ran out of time."

The final poll had Notre Dame first, Ohio State second, Oklahoma third, Alabama fourth, Penn State fifth, and Michigan sixth. For the third time in six seasons, the Nittany Lions finished the season undefeated and failed to win the national championship. It would take nine more years for Paterno to lead a team to No. 1. And that team lost a game by 21 points.

By the mid-1990s, long after Parseghian had retired, years after Bryant and Hayes had died, the bowl business lost its grip on the college football postseason. College football turned to the BCS, and eventually to the College Football Playoff, because the public got tired of bowl pairings that had no relationship to the rankings. The postseason had to be filled with something better than exhibition games.

In 1973, a combination of skill, luck, a flood of undefeated bluebloods, and NCAA probation gave us a regular season and postseason for the ages. The playoff might tell us who among LSU or Clemson is the best, but it won't have the star-studded lineup of 1973.

ESPN Stats & Information used a simple rating system (SRS) that included scores of games, strength of opponents and locations of games to rank their end-of-season top 10 from 1973 compared to the final AP poll. Their conclusion? Neither of the national champions from that season, Alabama (coaches' poll) nor Notre Dame (AP poll) were the best teams. 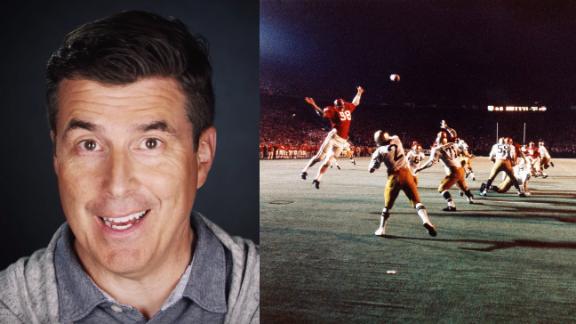