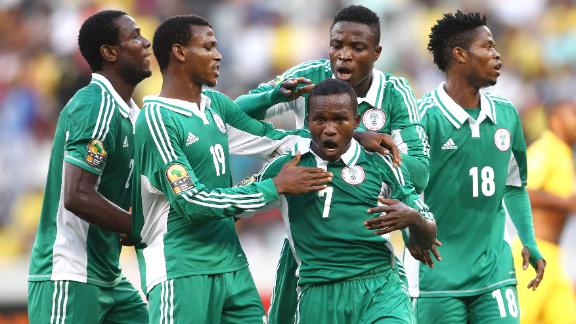 Our expert bloggers will give their thoughts ahead of each game, so as Iran take on Nigeria in Group F, Afshin Afshar (Iran) and Colin Udoh (Nigeria) are your guides.

Afshin Afshar: There is not much of a football rivalry or even history between Iran and Nigeria. The two senior sides have never met in a FIFA-sanctioned match, and although the lack of rivalry might take some of the edge off for some casual fans, the significance of this match is not lost for hard-core followers of either team.

The Super Eagles are the reigning African champions and in four previous tries have managed to go beyond the World Cup group stage twice, while Team Melli have failed in three attempts. So the pride factor is arguably bigger for the Super Eagles. They have been there before and believe that they should do it again. Team Melli, on the other hand, might be satisfied with a reasonably good showing even if it all ends prematurely.

Colin Udoh: Nigeria and Iran have only ever met once before. Garba Ahmed scored the only goal as the Super Eagles won 1-0 in the Carlsberg Cup hosted by Hong Kong, then went on to beat hosts two days later to claim the invitational trophy. There will be much more at stake here than a meaningless piece of silverware. Nigeria are expected to battle Bosnia-Herzegovina for the group's other qualifying spot behind Argentina, and anything but victory against Iran will certainly compromise those ambitions.

AA:  Ashkan Dejagah is the man to watch. The attacking midfielder is arguably one of the most physically fit players in the squad he is full of confidence. He has scored four goals in 14 matches for the international side an always has a high work rate.

He will be asked not only to push up often and combine with striker Reza Goochannejad, but also to chase the ball back and help the defence.

CU: For all the talk of Victor Moses, Mikel Obi, Emmanuel Emenike and Vincent Enyeama, it is very easy to miss the contributions of Ogenyi Onazi. The Lazio man has made a seamless progression from U17 through U20 to the World Cup proper and has real battling qualities. Whoever you are and however good you are, Onazi will hunt you down and subject you to the most discomfiting 90 minutes of your life.

AA: Emenike may well be the difference-maker. Will the sometimes soft Iranian central defenders be able to neutralise the dangerous Nigerian striker? If Emenike finds the lanes to run into, he can outmuscle his markers.

His pace and work rate makes him a threat all game, with the ability to wear down his markers and make them pay late in the match. Iranian defenders tend to lay off strikers especially late on when fatigue sets in, and this could be deadly against a striker such as Emenike. His shooting ability makes him a medium and even long range threat if given time and space.

CU: Javad Nekounam. He scored twice as many goals in qualifying (six) as Nigeria's top scorer, Emenike. While the argument can be made that he played more games -- and Emenike was injured for most of the series -- six goals in 14 games is still an intimidating return and the Nigeria defence will do well to be wary of giving him even the slightest suggestion of a sniff.

AA: The key battles in this match are most likely to take place in the middle of the field. Whoever controls the midfield is likely to win the match. For Iran, midfielders Javad Nekounam and Anderanik Teymourian sure up the defence. Although 33-year-old Nekounam does not cover as much ground as he used to in his earlier years, he still comes up with a goal just when Team Melli needs it most. He has scored 37 goals in his 140 international appearances.

On the other side, John Obi Mikel is often used as an attacking midfielder because Nigeria lack a world-class playmaker. Obi Mikel is more effective as combative presence rather than creative so it is safe to assume that he will also take on some defensive responsibilities.

Elsewhere, Ogenyi Onazi plays a more defensive role in central midfield and will play a key part  in breaking up Iran's attacks.

Will the two Team Melli midfielders be able to block Nigeria's attacks and cut their passing lanes yet at the same time look for opportunities to push forward?

CU: Reza Ghoochannejhad will plough his usual lone furrow up front as Iran try to smother the Nigerians while scrapping for set pieces that they are so dangerous at. Kenneth Omeruo, who has previously shut down Luis Suarez among other world class strikers, will have the responsibility of making sure that Dutch-Iranian is given as little opportunity as possible to add to his nine international goals in 12 appearances.

AA: Nigeria are clearly the favourites but as they demonstrated in their last two or three friendlies, they have not yet jelled as a team. If Iran can hold them off for the first 15 minutes and establish a passing rhythm, they have a chance. If not, then Nigeria winning 2-0 looks like a good bet.

CU: Nigeria don't score that many and Iran don't concede that much. It will have to be something narrow and 2-1 would suit Nigeria nicely.