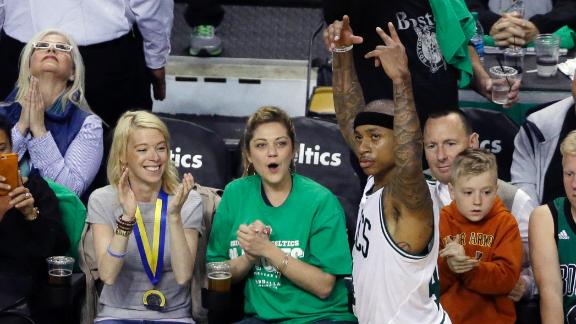 With 1:27 left in the first quarter of Boston's chippy 111-103 victory, Thomas and Schroder were hit with double technical fouls after jawing at each other.As the two were heading downcourt before the verbal exchange, Thomas could be seen throwing his left hand at Schroder's face.

Schroder said he couldn't believe Thomas was not called for anything right after that. After the game, Schroder told the Atlanta Journal-Constitution that he spoke to a referee at halftime who "apologized. ... He said he didn't see it."

"I'm not going to let nobody slap me in my face," the backup Hawks point guard told the newspaper."I told him that. If you want to play like that, we'll play like that. I was mad."

Schroder also tweeted his surprise after the game then deleted the tweet.

"Woow... They calling a flagrant foul on me!" Schroder tweeted. "Where I try to protect myself!!! But Isaiah Thomas can hit me in my face!"

Schroder, who also was whistled for a flagrant foul 1 on Thomas with 8:36 left in the fourth, included a picture of Thomas' hand on his face in the tweet.

Thomas, who gave the Celtics their first victory of the postseason to cut the Hawks' lead in the series to 2-1, said he is not worried about a potential suspension or fine.

"I'm not," Thomas said. "Because I didn't mean to hit his head. He got mad. He was talking. It's playoff basketball. That's what it's about. I'm not going to back down from anybody, and he knows that."

The Hawks expect the NBA to review the play.

"I know that [Hawks coach Mike Budenholzer] read us a really long memo before the playoffs started, saying what would happen if you threw a punch," Hawks guard Kyle Korver said. "So I guess we will see what happens. I haven't seen a replay. I know Dennis said he got hit. I'm sure we will see and hear a lot about it in the next couple of days."

"Both teams were competing," Boston coach Brad Stevens said. "Sometimes, when you're competing, it gets physical. But I didn't think -- obviously the flagrants, I'll have to go back and look at them -- but obviously they were fouls where they got hit in the head. But I didn't feel like there was anything on either side that was over the line, from my impression when I was watching."

Thomas hit 12 of 24 shots, including 5 of 12 from beyond the 3-point line, and made 13 of 15 free throws to keep Boston in this series. Schroder, who came in as a game-time decision with a sore ankle, scored 20 points on 8-of-14 shooting. Game 4 is Sunday night in Boston.

"My thoughts are, the league will review it," Budenholzer said. "The league does a thorough job in all things like this. As far as an explanation, there wasn't an explanation. There was a double technical. There was no review of the incident in the backcourt by the free throw line."