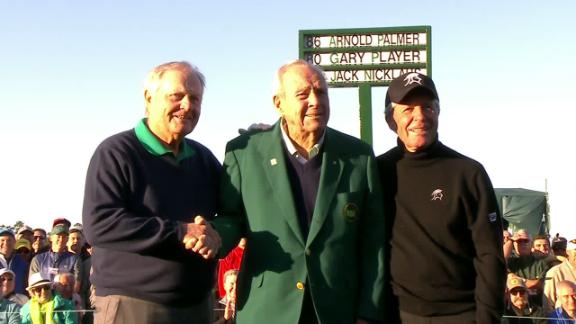 AUGUSTA, Ga. -- With Arnold Palmer a spectator on the first tee, Jack Nicklaus teed off with a tear in his eye and Gary Player took great glee in knocking his drive past the Golden Bear as they kicked off the Masters on Thursday morning.

The golf legends seemed to enjoy their ceremonial duties, although there was a tinge of sadness as Palmer, 86, was unable to join them in hitting a tee shot to get the 80th Masters started.

"I think that everybody was happy to see Arnold out on the tee," Nicklaus said afterward. "I think Arnold was happy to be on the tee. I think he would have preferred to hit a golf ball. I talked to him at the Masters dinner. I said, 'Arnold, when you're out there, what if we just take you up and had you hit? I don't care if you putt it off the tee. I think everybody would love to have you do anything.'

Nicklaus said Palmer told him Thursday morning that it would be better to "leave it alone" and sit out the ceremonial shot.

"So I think it probably was the right thing. Arnold's balance is not good, and that's what they were worried about," Nicklaus said. "But I think he was delighted to be out there. I think we were delighted to have him there. I think both Gary and I felt it was more about Arnold this morning than anything else, and I think that was just fine."

Masters chairman Billy Payne introduced Palmer as "not driving this year, but forever a part of Masters tradition."

Palmer, who played in 50 straight Masters and won the tournament four times, had served as honorary starter since 2007. Nicklaus, 76, joined him in 2010, with Player, 80, adding on in 2012. The three players combined to win the Masters 13 times, including seven straight in the 1960s.

"To come here today and to be on the tee with Arnold being a part of us, it was gratifying and sad, because everything shall pass," Player said. "But it was nice to have him on the tee. I dedicated my first tee shot to him in respect.

"It's a very special moment, and I think the love that is extended to us wherever we go in the world is most gratifying that so many people would be on the first tee to see one shot. One billion people seeing one shot around the world is quite extraordinary. My daughter was on the beach yesterday and saw the hole-in-one [during the Par 3 Contest]. People from Zurich and Australia all sending us a message. It's quite remarkable. Just a very, very exciting moment to stand on the first tee and to be received the way that we've been received."

Nicklaus and Player spent the interview session telling stories and needling each other, Player enjoying the fact that his drive went 20 yards past Nicklaus' and the Golden Bear saying he hit a "popup."

"I was reluctant to want to do it," Nicklaus said of the honorary duties when he first started. "I really wasn't ready to be a ceremonial golfer yet. It took me a while to accept my position as far as that goes. I think we all still think we can play. I think when I first started doing this, I think I still had in my own mind that I could play, but I was wrong. I know that now. Well, I knew it then too, but didn't want to admit it.

"Now I come here, and I bring my grandkids to caddie for me. Gary is doing the same. ... And then hitting the ball off the first tee, Gary outdrives me every year now, which is OK. He keeps himself fit, and he practices hard for the first tee shot. He brought out a yellow ball today that was marked a little differently. I think it probably said 'illegal.'"

Player said he did 1,300 situps and crunches Wednesday and clearly takes pride hitting that tee shot.

"I wouldn't be too concerned about me outdriving you," Player said to Nicklaus. "You did it to me for 50 damn years.''