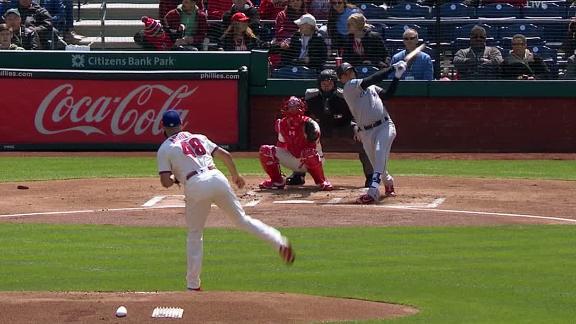 Jake Arrieta lasted just four innings in his Philadelphia Phillies debut Sunday. The right-hander was lifted for a pinch hitter after throwing 74 pitches.

Arrieta did not appear to suffer an injury and was in the on-deck circle with his helmet on in the bottom of the fourth.

But with the score tied 3-3 and no runners on base with one out, Phillies manager Gabe Kapler replaced Arrieta with pinch hitter Pedro Florimon. The Phillies went on to lose to the Marlins 6-3.

Kapler, also in his first season with the Phillies, has already come under scrutinyfor several unorthodox moves in Philadelphia's first seven games this season.

The manager drew the ire of fans on Opening Day when, with Philadelphia holding a 5-0 lead, he pulled starter Aaron Nolain the fifth inning after he had thrown 68 pitches in a game that the Phillies ultimately lost 8-5.

But the former Cy Young Award winner settled down after his opening frame. He finished with five strikeouts and two walks while allowing three runs (two earned) in four innings. He retired 10 of his last 11 hitters.

"I was erratic at first," Arrieta said. "Got through four innings, pretty crisp in the last three. Very optimistic moving forward."

Arrieta expects to throw 85 to 90 pitches in his next outing.

"We want to make sure he's healthy and strong,'' Kapler said. "We're all on the same page. It was a great performance.''

Arrieta made headlines last month when he signed a three-year, $75 million deal with the Phillies, ending his extended stay on the free-agent market.