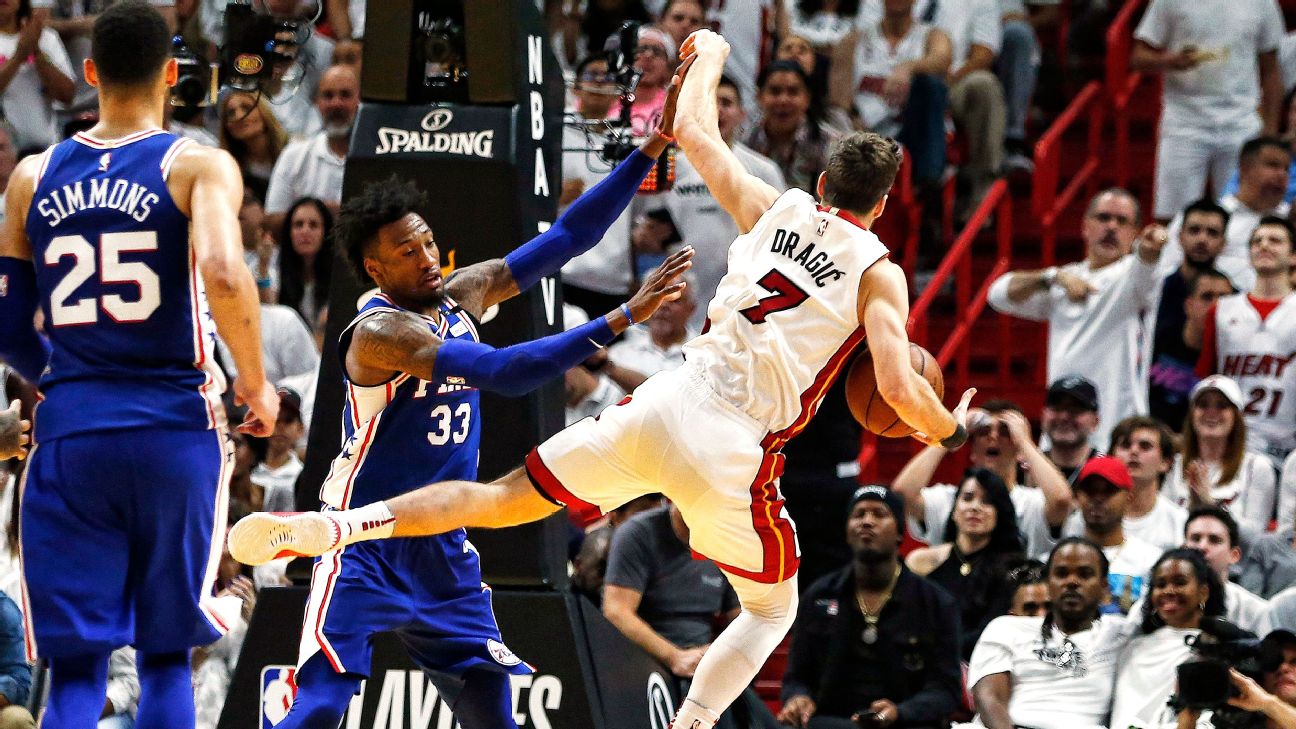 MIAMI -- A hard hit in Game 4 of the Philadelphia 76ers-Miami Heat series led to a skirmish involving several players and coaches.

Heat forward James Johnson, Sixers guard Ben Simmons and Sixers wing Robert Covington had to be separated during the encounter, which resulted in technical fouls for Johnson and Covington and a personal foul for Simmons.

The skirmish began when Covington delivered a hard hit on Heat guard Goran Dragic. Johnson took offense to the foul and shoved Covington near the basket in the second quarter of Philadelphia's 106-102 win over Miami. Simmons, who was trailing Dragic and Covington nearby, then engaged Johnson, and coaches and players came to intervene.

Sixers center Joel Embiid came from the other end of the court, seemingly to defend his teammates. Heat coach Erik Spoelstra stepped in to try to separate players.

In the aftermath of the skirmish, Simmons was whistled for a personal foul on Dragic, which he committed before Covington's blow to the Heat point guard.

Johnson downplayed the physical exchange with Covington and Simmons afterward.

"I know Robert Covington, I know he's not a [dirty] player like that," Johnson said. "But I also do know it's the playoffs and guys are going to have to make statement fouls sometimes. ... For him to make a foul like that, it had to be to ignite his team or to get his guys going in a different way. Ben [Simmons] and I, just two guys protecting our own teams."

Said Simmons: "If someone is going to push my teammates, I'll be there for them. Everyone's got my back on my team, and I think it's vice versa with the Miami Heat."

The NBA reviews all technical fouls and any fight or skirmish, so the league will review this incident and could potentially levy extra punishment.

Sixers coach Brett Brown predicted Friday that Game 4 of the series would feature physical play. There were 56 combined personal fouls in Game 3, and each team received three technical fouls.

"It was always going to happen. You didn't have to be a mystic to predict what this game was going to look like," Brown said. "The discipline of no bench clearing and no ejections, that was what was most on my mind."

Heat wing Justise Winslow received four stitches above his left eye after being cut in a play unrelated to the incident. Miami's Josh Richardson went to the locker room with a shoulder injury in the second quarter. Both appeared to get injured in a collision involving a group of players, including Embiid, in the play that preceded the skirmish.Both Winslow and Richardson later returned to the game.