Jeff Hornacek: Knicks' defense must improve; not sure if it can 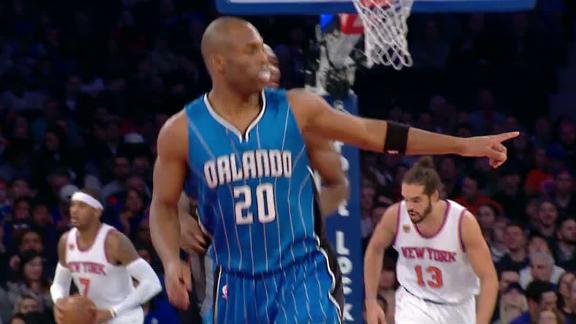 NEW YORK -- Knickscoach Jeff Hornacek questioned whether his team has enough talent to compete on defense after a 115-103 loss to the Orlando Magicon Monday night.

"I think they're trying," Hornacek said of the Knicks. "We just must not be good enough defensively."

New York allowed 115 points to a Magic team that entered play Tuesday averaging 99 points per game. It was the club's fifth straight loss and eighth in 10 games. Defense has been an issue throughout the skid.

"I have to find someone to play some defense," Hornacek said. "You can't come out beginning of the game -- I think their first three or four baskets were 3-pointers. We've got to have better pride in that."

Hornacek suggested after the game that coaches would try to implement some gimmicks into the Knicks' defensive scheme or change lineups. But he reiterated that the club may not have the personnel to be an adequate defensive team.

"I don't think our guys aren't trying. Maybe we're just not capable of it. I don't know," Hornacek said. "That's what we're going to have to figure out. Maybe you have to play some of these other guys. We might have to mix the lineup up somehow."

Hornacek's criticism of the roster that team president Phil Jackson put together seems justified. The Knicks have struggled to get stops all season and don't seem to be progressing. They've allowed an average of 113 points in this five-game losing streak and rank 25th overall in points allowed per 100 possessions.

"There are times where we just didn't go after the ball hard enough," Hornacek said. "There were some rebounds up there that they just took out of our hands and came over our backs. That's when maybe we need to be in the weight room a little bit more."

The Knicks were without Kristaps Porzingis against Orlando. He missed his second straight game due to a sore left Achilles. Porzingis said he still feels some discomfort while attempting "explosive" movements but he's optimistic about returning for Wednesday's game against the Milwaukee Bucks.

Carmelo Anthony returned to the lineup Tuesday after missing the second half of Saturday's game with knee soreness. He said after the game that his knee wasn't bothering him.

The Knicks' defense, though, clearly bothered their coach.