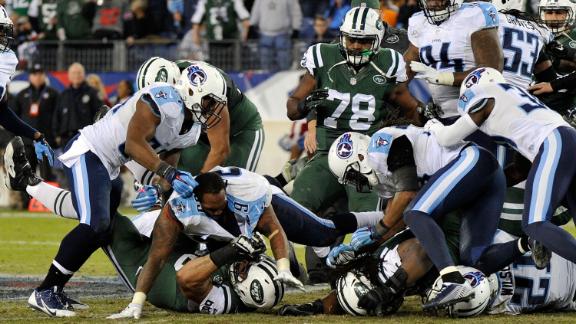 "I assume he's going to get quite a hefty letter [from the league]," center Nick Mangold said, by which he meant a fine from the NFL office.

Only one penalty flag was thrown on the play: unnecessary roughness on Casey. The fight sparked the Jets, and they rallied to beat the Titans 16-11 at LP Field in a sloppy game between two teams that began the day with 2-11 records.

The misfield brawl occurred during a TV timeout, while the official reviewed an apparent 81-yard touchdown pass to Eric Decker. Thereplay review determined he stepped out at the 33-yard line.

During the break, Smith and Casey were jawing. Casey took a swing, which prompted offensive linemen Mangold, Breno Giacomini and Willie Colon to rush to Smith's defense. Some players came off the Jets' bench to create a mob of players at midfield.

Casey, a captain, was livid and had to be restrained by teammates and coaches. When the telecast returned from a commercial break, TV viewers saw about 30 players in the middle of the field, shoving and trash talking.

Smith refused to say what he told Casey to precipitate the fight and insisted it was just routine trash talking - "just football stuff." Pressed, Smith asked, "Is this an investigation?"

Smith said he was shocked by the punch.

"Anytime that happens, you're surprised," he said. "You don't expect those things to happen on a football field. Football is made to be played on the field, and not that other nonsense. Obviously, it escalated."

Casey apologized to his team and admitted he lost his cool.

"I just have to control my emotions in that situation," he said in refusing to reveal what Smith said to set him off. "You know, words don't hurt you. He didn't put his hands on me, and I shouldn't have put my hands on him."

Mangold, who already had removed his helmet thinking Decker had scored, rushed the field when he saw the punch.

"The guy punched him in the facemask, and that ain't right," the normally mild-mannered Mangold said.

Asked if he was surprised it got out of control, Mangold said, "You punch a quarterback in the face, it should escalate quickly, don't you think?"

The Jets trailed 8-3 at the time of the fight, and they scored two touchdowns afterward too hand the Titans their eighth straight loss.

"It was a dumb move on his part," Giacomini said of Casey. "He's a good player. He doesn't need to do that stuff."

Clearly, Rex Ryan loved the way his players responded and backed their embattled quarterback - but he watched his words.

"I'm not going to say that because it would be a fineable offense, but having your quarterback punched in the face - or what looked like a punch in the face - sometimes something like that happens," he said. "But you want to keep your players on the sideline. Clearly, I have to do a better job of that."