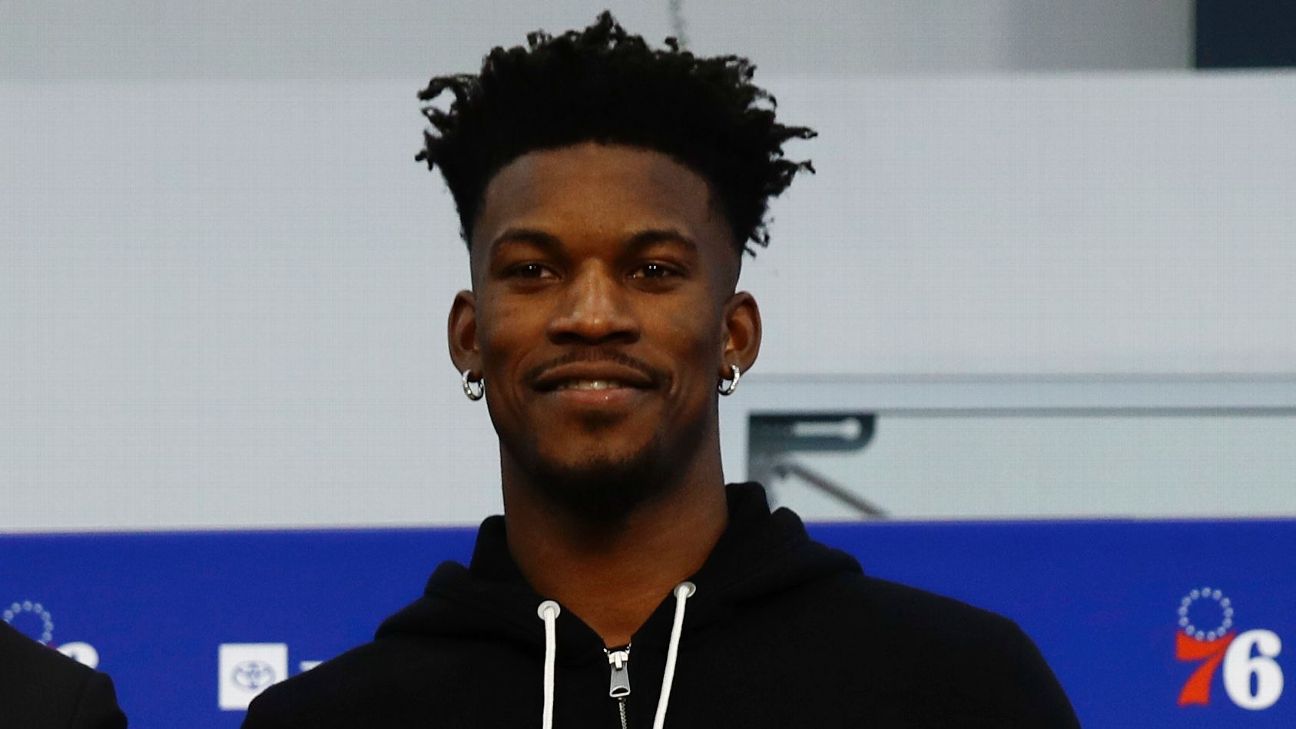 CAMDEN, N.J. -- On his first day in his new home, Jimmy Butler made it clear that he expects to fit in easily with the Philadelphia 76ers.

"When guys go out there and they know how to play basketball, which everybody on this roster does, it's all going to fall into place," Butler said at his introductory news conference on Tuesday. "I don't think that anybody is going to step on anybody's toes. I think everybody still has the same job to do, and everybody's expected to be the same player that they've always been. That's why I think it's going to be successful."

Sixers GM Elton Brand reiterated that he sees Butler as an addition who can push Philadelphia toward its goal of winning a title.

Brand and the Sixers acquired Butler and Justin Patton in exchange for Robert Covington, Dario Saric, Jerryd Bayless and a 2022 second-round draft pick in a trade with the Minnesota Timberwolves completed Monday.

"[Butler's] goals match ours and the city of Philadelphia."

The blockbuster trade ended a two-month saga for Butler and the Timberwolves. The four-time All Star told Minnesota shortly before training camp that he wanted to be traded, which forced the Timberwolves' hand because it was clear that Butler would not re-sign next summer.

Butler is expected to debut with the Sixers on Wednesday at Orlando. His home debut will be on Friday against the Utah Jazz.

There were reports in recent weeks that Butler had a poor relationship with young Timberwolves teammatesKarl-Anthony Townsand Andrew Wiggins. Butler pushed back on that assertion Tuesday, pointing out that no player has ever said publicly that he has an issue with the 29-year-old.

"I think if a player had a problem with me, they would [say it]," Butler said. "Unless everybody in my past locker rooms were just that fake, I don't think that I was a problem at all."

He added, "I don't think I'm a bad teammate, but people get whatever they want to say out. I think I'm an incredible human being, teammate, and I will show that to the guys here."

Brand said that he talked to several of Butler's former teammates, coaches, executives and team staffers before agreeing in principle to the trade last Saturday.

Butler said he was "very excited" to start playing with Philadelphia, which now has its own Big Three with All-Star center Joel Embiid and 2017-18 Rookie of the Year Ben Simmons.

"I like the sound of it," Butler said when asked about the Sixers' new Big Three. He added that his goal this season is a simple one. "Obviously win a championship. That's why we play, why they play. Why they did what they did."

Butler acknowledged that he may have to adjust to having the ball less when sharing the court with Simmons and Embiid.

"I don't think that's a problem. I think I'm great at sharing the ball, moving without the ball," he said. "We'll find a way to make things work."

Butler can opt out of the final season of his current contract and test free agency this summer. The 76ers would be able to offer Butler a five-year max contract worth $190 million, while other teams could offer four years and a projected $141 million.

Brand intimated that the rest of the season would be a period of evaluation for both Butler and the Sixers as the summer approaches.

"We hope he sees a fit here. We hope that we see the fit there this season because we know what kind of talent he is," Brand said. "He's a superstar player so we're definitely looking forward to having those discussions, but we can't have those yet."

Monday's trade ended the longtime partnership between Butler and Timberwolves president/coach Tom Thibodeau. Thibodeau coached Butler with the Chicago Bulls and traded for Butler during the 2017 NBA Draft.

"Thibs is my guy. The world knows that. You know that. It was hard going through that with Thibs," Butler said. "But he knew what it was for the most part. I have so much respect for him and the organization and the players that they have. It just didn't work out. That's part of it; that's part of the business; that's part of life. I still wish them the best. I still talk to those guys."

The trade also leaves Philadelphia with an open spot on the 15-man roster. Brand said that the team wasn't close to filling the roster spot but added "we feel that we can do some real damage to help our team" with the opening.

The first-year GM also acknowledged that adding shooting is a priority for the Sixers.

"We absolutely will evaluate the market and see what's out there. We're getting tons of calls," Brand said. "That open roster spot can pay some big dividends."