When he returns to the court -- likely in the first round of the Sixers' playoff series against the Miami Heat -- Embiid will don a face mask, joining a handful of recent NBA stars who suffered facial injuries and were forced to wear protective gear.

Embiid showed off a dramatic black mask on the sideline at the Sixers' home finale Wednesday night and leveraged the situation in his favor on social media -- as he has done in almost every scenario this season -- by posting a self-deprecating Instagram photo.

Here's a look back at some notable NBA stars who have rocked the mask:

Joel Embiid will likely have to switch to a clear mask once he returns, given the NBA's preference.Embiid said it is "unlikely but still a chance" that he plays in the Sixers' first playoff game this weekend.

Irving has worn a mask not once, but twice. After breaking his jaw during the 2012-13 season, Irving dropped a then-career-high 41 points in the Cavaliers' 103-102 loss to the Knicks in December 2012 (he also temporarily wore a black mask). Then, in November 2017, Irving suffered a facial fracture, forcing him to return to the mask for the rest of the month and into early December.

Westbrook fractured his cheekbone after taking an inadvertent knee to the face in March 2015, and two days later put up a 49-point, 15-rebound, 10-assist triple-double in a win against the 76ers.

For those who subscribe to the theory that players play better with a mask on, James is a prime example. James scored a career-high 61 points,which is still a Heat franchise record, against the then-Charlotte Bobcats on March 3, 2014. Though he initially wore a black carbon-fiber mask, the NBA requested James switch to a clear mask after one game.

Paul suffered a nasal fracture after being hit by an elbow from Danny Green in a win over the Spurs on March 9, 2012, and subsequently wore a mask for a few weeks heading into the 2012 postseason.

Bryant, who had suffered a fractured nose during the 2011-12 season, started a game against the Pistons wearing a black Zorro-inspired mask. After some discomfort, Bryant switched back to a clear one midgame.

The 2017 Hall of Famer wore a protective mask in 2006 while with the Rockets after taking an accidental elbow to the nose.

Arguably the most notable mask-wearing player in NBA history, Hamilton made it his calling card after breaking his nose during the Pistons' title run during 2003-04 season. He ended up wearing the mask until he retired after the 2012-13 season. 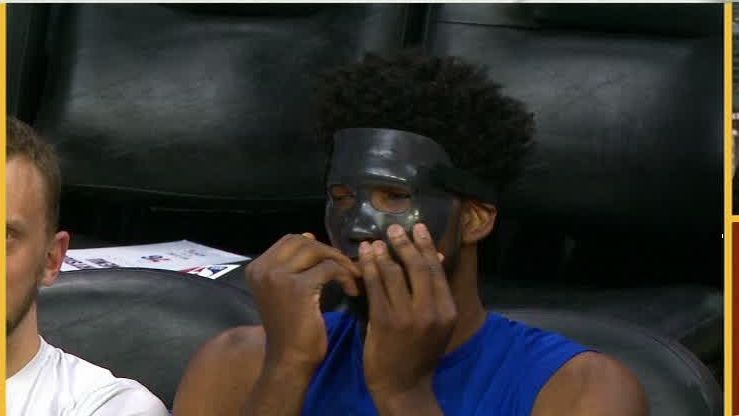 'The Process' has a new identity
Joel Embiid has now changed his name to the "The Phantom of The Process" with the addition of his new mask.
Report a correction or typo
Related topics:
sportsespnrichard hamiltonjoel embiidrussell westbrookphiladelphia 76ersmaskskyrie irvingnbachris paulkobe bryantmasklebron jamestracy mcgrady
Copyright © 2020 ESPN Internet Ventures. All rights reserved.
More Videos
From CNN Newsource affiliates
TOP STORIES